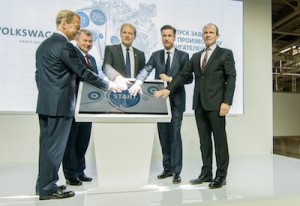 Despite the continued slump in the Russian automotive market, a number of foreign OEMs are localising engine production in the country. Volkswagen and Ford have opened facilities in Russia in the last week, and Mazda’ joint venture with Russian OEM Sollers has signed a memorandum with the government to establish an engine plant in the Far East region of the country.

The various moves come ahead of the demands made under Decree 166, the agreement foreign carmakers have made with the Russian government to increase local content in at least 30% of the vehicles they make in Russia by next year.

Volkswagen is making 1.6-litre engines at its newly constructed $279m facility in Kaluga and plans to introduce the EA211 gasoline engine in the near future. The carmaker has completed the plant within three years following its announcement back in 2012.

Production capacity is set for approximately 150,000 engines a year for instalment in VW brand and Skoda models, including the VW Polo and the Skoda Rapid, which are made in Kaluga at VW’s nearby assembly plant. The engines will also be used in the VW Jetta and Skoda Octavia and Yeti models, built with Russian carmaker GAZ at the companies’ joint venture plant in Nizhny Novgorod.

"With our new, modern engine plant, we will be supplying engines produced locally for our vehicles manufactured in Kaluga and Nizhny Novgorod,” said Marcus Osegowitsch, general manager of Volkswagen Group Rus. “We will therefore not only be increasing the local content of our cars, we will also be making them more affordable for our Russian customers."

The new engine plant has an area of 32,000 sq.m and is to produce up to 600 modern 1.6-litre gasoline engines of the newly developed EA211 series per day.

The move to locally produce engines means VW is fulfilling its obligation to supply at least 30% of the vehicles it makes in Russia with engines made in the country. As mentioned, this requirement is part of Decree 166, the Russian government’s plan to encourage local production.

Joint ventures with Sollers
Meanwhile, Ford has started production of 1.6-litre Duratec engines at its newly constructed $275m engine plant in Elabuga. They will be installed in models including the Ford Fiesta, Focus and EcoSport, which are built by Ford’s joint venture with Sollers in Russia.

The facility has an annual capacity of up to 105,000 units, with the possibility for further expansion of up to 200,000 engines a year. As with VW’s output, at least 30% of Russian-built Ford vehicles will be equipped with the locally-built engines.

“Our main target in line with our long-term localisation strategy was to launch engine production with a significant level of localisation,” said Adil Shirinov, executive director and chief operating officer, Ford Sollers. “We are proud to say that we are not only sourcing main parts from Russian companies, but they also are manufactured from local raw materials. We are fully committed to this strategy which is key for our business in the current environment.”

Ford Sollers now produces seven vehicles in Russia. As well as the EcoSport, Kuga and Explorer, it launched production of the all-new Mondeo, new Focus, new Fiesta and new Transit earlier this year.

The Ford Sollers Elabuga Engine Plant occupies 42,600 sq. m and is located in the Alabuga special economic zone, next to one of the three Ford Sollers vehicle assembly plants in Russia. There is a further plant in Elabuga and another in Vsevolozhsk.

Mazda and Sollers, meanwhile, have announced memorandum of understanding with the Russia government to set up an engine plant at the site of their joint venture plant in Vladivostok in the Far East region.

Mazda Sollers Manufacturing Rus has produced around 80,000 vehicles since it began operations in 2012.

“We are pleased to have been able to make a contribution to this region by creating employment and helping to develop a culture of monozukuri, or manufacturing,” said Mazda’s representative director, president and CEO, Masasmichi Kogai, at the signing of the agreement last week. “This success has been possible thanks not only to our great partnership with Sollers but also to the continued support of the Russian government, the Primorsky region and the government of Japan.”