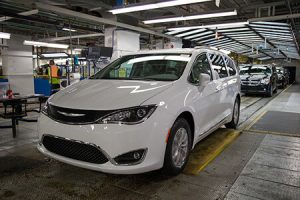 Carmakers in North America are still being affected by inbound supply problems stemming from a fire that hit the Michigan facility run by a division of components supplier Meridian Lightweight Technologies at the beginning of May. The Magnesium Products of America plant makes instrument panel components.

Ford’s output of the F-150 truck has been affected at the Kansas City and Dearborn plants, with production brought to a standstill last week. Fiat Chrysler Automobiles (FCA) has confirmed that production at its Windsor plant in Canada, which makes the Chrysler Pacifica (pictured) and Dodge Grand Caravan, has been affected – though a spokesperson for the company stressed that Pacifica production was still continuing at a reduced rate and that Grand Caravan assembly was unaffected, as the vehicle did not contain any parts supplied by Meridian.

“The company is adjusting production schedules as needed to minimise plant downtime, but will make up any lost production,” said the spokesperson. “FCA continues to work with the supplier’s team on recovery efforts.”

SUV production at BMW’s Spartanburg plant and the Mercedes-Benz plant in Tuscaloosa are also reported to have been affected, though neither company would provide details.

Meridian has not issued a statement on the situation but according to the Lansing State Journal, a report on the cause of the fire and subsequent explosions is expected this week.