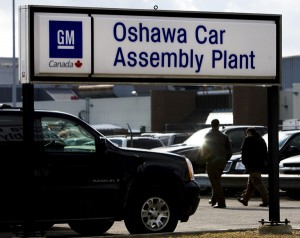 Vehicle carriers supporting outbound movements from GM Canada’s Oshawa plant in Ontario have welcomed the news that the latest threat to continued production there has been averted.

“GM Oshawa has been a question mark for a number of years now as we have seen a major decline in production here with the removal of the truck production a number of years ago, the Camaro, and a few other lines that have come and gone,” said Chad Doiron, CEO of vehicle haulier, CCT Auto Trans. “GM’s commitment is a huge deal for the automotive sector here in Ontario as it is the oldest automotive plant in the province with numerous feeder plants in the area. This news secures thousands of jobs in the region.”

An agreement on continued production for the plant was reached at the last minute ahead of threatened strike action by Canada's largest union, Unifor.

Just after midnight on September 20th, GM Canada and Unifor reached a tentative agreement that the carmaker said would enable “significant new product, technology and process investments” at the plant and across supporting facilities in St Catherine's and Woodstock. Unifor has been looking for guaranteed commitment from GM that it would bring new model production to Oshawa as carmakers en masse relocate production in North America to Mexico.

GM's Oshawa plant currently makes the Chevrolet Impala, Buick Regal, and Cadillac XTS on its Flex line, and the Chevrolet Equinox on its second 'consolidated' line. That output is supported by powertrain production at St Catherine's, which makes the V6 and V8 engines, as well as six-speed transmissions, though St Catherine's also produces engines for GM's other plants.

GM planned to end Equinox production there next year and did not have any new vehicles planned for the Flex line beyond 2019. The company had already shifted the Camaro south of the border to Lansing in Michigan in November last year.

GM had granted an extension of production for Oshawa to this year, following a threat to stop production there back in October 2013. That followed a plan 11 years ago, made by then CEO Rick Wagoner, to end production at the plant.

According to the Detroit News, however, the investments indicated by GM in its latest statement could see a $520m investment across the two plants. The carmaker has yet to confirm that figure. The deal will also be good news for GM suppliers in nearby Woodstock.

“We will be working with government on potential support, and will provide further details on the investment at the appropriate time, while respecting Unifor’s ratification process,” said GM in a statement.

According to Jerry Dias, Unifor's national president, the framework deal is the start of “a historic agreement” to secure the future of the automotive industry in Canada and the communities supporting it. The union is looking for similar commitments from Ford and Fiat Chrysler Automobiles (FCA).

Continued output at the Oshawa plant has been welcomed across the region, not least by the finished vehicle carriers handling volume delivery within Canada and into the US, including CCT Auto Trans.

“For CCT, this is extremely important with Oshawa in our backyard and with us just finally gaining contractual business out of Oshawa two years ago, at a risk of potential closure,” said Doiron. “This news now secures our position with GM in Oshawa and allows us to work on additional volumes out of this origin.”

As reported last week, the details of GM’s plan include the closure of one of two assembly lines at the Oshawa plant but the company will rebuild another assembly line there to produce cars and commercial vehicles. It has also said it will move production of one engine out of Mexico to its St Catharine’s plant.

Doiron said GM’s announcement that it would be taking a product line manufactured in Mexico and moving it to Oshawa was a very positive note in general for the automotive sector in Ontario.