Cathay Pacific Airways has announced that it will launch its first-ever service from Latin America, with a scheduled freighter from Mexico to Hong Kong that will include the movements of automotive parts.

The freighter service, plans for which are subject to government approval, will launch to Guadalajara in the last quarter of this year, according to a company statement. If approved, it will be the first freighter service offered by any company between Hong Kong and Mexico.

The company said that the new service is designed to allow shippers greater choice and more flexibility when connecting to Cathay Pacific’s international cargo network through its central Hong Kong base.

Guadalajara is Mexico’s second-largest city. Cathay Pacific says it will enable the increased volume of auto parts, electronics, garments and perishables being exported from the city through a twice-weekly service. A Boeing 747-8F, the company’s newest and largest freighter, will be used to transport such commodities from Latin American and the United States to various points in Asia.

Cathay Pacific Chief Operating Officer, Ivan Chu, said: "With growing demand for direct cargo services between Asia and Mexico, our new freighter service will help to establish a very important trade lane between the two regions. At the same time it will help to further strengthen Hong Kong's position as one of the world's busiest international airfreight gateways." 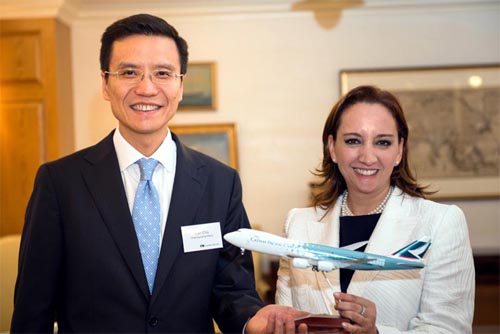