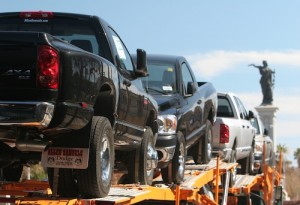 Car Delivery Network (CDN) has reported that its electronic proof of delivery (ePOD) application vinDeliver is now being used to handle 2.5m finished vehicles annually, giving it a market share in the US and Canada of 15%.

The app, which is an online vehicle delivery transport management system, connects carriers with drivers delivering single, multi-load and driven vehicles. In June, it helped to move more than 200,000 vehicle units, according to CDN, which said it now had over 1,330 transport fleets across the US and Canada registered on the system, servicing 10 OEMs.

That shows significant growth since CDN introduced the application with Fiat Chrysler Automobiles (FCA) two years ago, when the carmaker mandated that all vehicle deliveries to its dealers in the US must be administered electronically.

Since then a carriers handling vehicles for a number of other leading OEMs, including GM, Toyota, Honda, Nissan and VW, have signed up to the service.

“We are very pleased with how North American auto haulers have embraced vinDeliver " said Greg May, CEO and president of CDN. "Reaching an annual run rate of over 2.5m VINs and achieving 15% market share of all new vehicle deliveries in less than two years has greatly exceeded our expectations for growth.

“As OEMs and shippers recognise the competitive edge delivered by adopting ePOD technology, we have seen many new carriers connecting to the CDN cloud platform and predict continued growth as they roll out vinDeliver to their drivers,” he added.