Ceta deal is an opportunity but TTIP is the main prize, says VDA 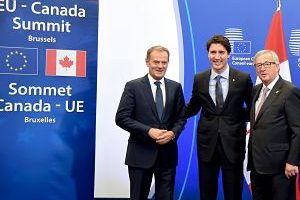 The Comprehensive Economic and Trade Agreement (Ceta) signed this week may create an opportunity for increased vehicle sales to Canada by European manufacturers. But given how small that market is compared to the US, it has also highlighted the need to close the Transatlantic Trade and Investment Partnership (TTIP) as quickly as possible, German automotive association, the VDA, has suggested.

“Now, it is important to complete the negotiations on TTIP also. Ceta can only unfold its full potential alongside TTIP,” said VDA head, Matthias Wissmann.

The Ceta agreement has been over seven years in the making and is Canada’s biggest bilateral initiative since the North American Free Trade Agreement (Nafta).

Scotiabank auto industry specialist, Carlos Gomes, told Automotive Logistics that in terms of vehicle trade, Canadian auto industry exports to the EU were minimal, as the industry there was almost exclusively focused on North America. Earlier this year, in fact, Honda ceased exporting CR-Vs to Europe from Canada so its operation there could focus on North America, switching supply of CR-Vs for Europe to Japan instead.

The EU does, however, account for about 9% of Canada’s $59 billion auto industry annual imports.

“The duty-free access will likely enable automakers and parts suppliers to gain share in Canada. Vehicles account for about two-thirds of auto industry exports from the EU to Canada,” said Gomes.

With its fare share of critics, Ceta hit another snag just before the recent signing ceremony, when the small farming region of Wallonia in Belgium voted against the proposal. But a compromise was reached and days later Canada’s Prime Minister, Justin Trudeau made the flight to Brussels to sign the 1,600-page treaty.

VDA’s Wissman described the agreement as a milestone for Europe’s economy saying it showed the region to be a “functional and reliable negotiating partner”.

“Ceta is one of the most progressive of all trade agreements worldwide. It opens up huge opportunities on the Canadian market to companies from Europe, and protects consumer, environmental and labour standards as well as regulatory flexibility in the EU and its member states,” he added. “This makes Ceta a model for other agreements.”

The agreement still has to be ratified by 38 national and regional parliaments in Europe.

Once in place, it will eliminate 98% of the tariffs between Canada and the EU and officials hope it will increase trade between the two by over $12 billion a year.

Similar deals have proved of significant benefit in the past. For example, in July, a report showed that the EU’s annual car sales in the Asian country had tripled in the five years since the Korea-EU free trade agreement was ratified.

“Here, too, we wish to see a good and prompt conclusion to the negotiations. Transatlantic trade and the political partnership are simply too important for this project to be allowed to fail. The negotiations on TTIP must not drag on as they did for Ceta,” said Wissmann.