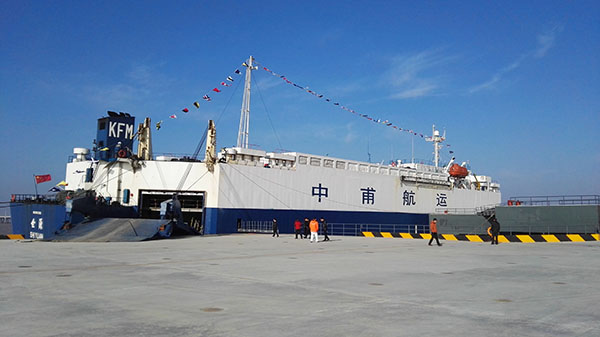 Changjiu Logistics is partnering with Lingang Modern Logistics to deliver vehicles for BMW-Brilliance Automotive (BBA) from Shenyang, in north-east China, to Shanghai via coastal waterways for further distribution in the important east China region.

The two parties signed a partnership agreement this week in the kick-off ceremony held at Shanghai Nangang, on the southern perimeter of the city along the Hangzhou Bay.

In late April, Changjiu was awarded a three-year contract with BMW-Brilliance, which manufactures BMW models for the Chinese market. Changjiu will move BBA vehicles from the carmaker’s Shenyang plant by truck to the vehicle terminal at the port of Dalian, a distance of around 400km. From there, vehicles will be taken by ro-ro vessels to Shanghai’s Nangang vehicle terminal. Changjiu and BBA expect the transport flow to reach around 180,000 units per year.

Short-sea transport solutions together with warehousing and distribution operations in in eastern China are both at the core of BBA’s logistics strategy for finished vehicles in the region. “We make cars with our social responsibilities in mind and thus would also think of green solutions when it comes to logistics. Our strategy of involving more water and rail [in vehicle transport] remains unchanged,” said Tian Chaohui, finished vehicle logistics director of BMW-Brilliance.

Expanding the use of use of multimodal options such as coastal ro-ro shipping and inland waterways will also be an important strategy for coping with changes to China’s trucking regulations. According to China’s GB1589 regulation, which will come into force this year, car carriers in the country will have to follow stricter guidelines and dimensions, which could see load factors reduced from 20 vehicles or more per truck to 8-10 vehicles. Logistics providers will have around two years to comply with the new regulations.

New partnerships for multimodalChangjiu Logistics is one of the largest third-party logistics service provider in China in the area of automotive logistics and the largest privately-owned one. Unlike other, state-owned companies, it has no direct affiliation with an OEM.

CDC International Logistics, a subsidiary that is owned 70% by Changjiu and 30% by the port of Dalian, will be responsible for the sea voyage by ro-ro vessel via its wholly owned Kingfour Marine, with three 2,100-unit capacity vessels that will soon be put into operation. According to CDC, the fleet is the first in China that will be able to carry out ocean shipping and move vehicles along the Yangtze River, which is an important distribution artery for China between Shanghai and Chongqing, in the south-west.

Changjiu, which has long provided logistics services for BMW-Brilliance, has established a new strategic partnership with Lingang Group for this project.

“The BMW-Brilliance project provides a key opportunity for the partnership between Lingang Group and Changjiu Logistics to work towards developing the largest multi-purpose auto logistics hub in the east China region,” said Bo Shijiu, chairman of Changjiu Logistics.

Nangang, whose operation is managed by Lingang Modern Logistics, is a young member of the larger port of Shanghai. It is a public terminal located in the south-eastern part of Shanghai, where five modes of transport converge – air, sea, rail, road and inland waterway. The Shanghai Lingang Industrial Zone in this area has planned a logistics park of 23,000 sq.m. Its ro-ro berths, combined with availability of multimodal transport, access to ample land supply and position close to consumption centres, make Nangang a viable automotive logistics hub.

“The BMW-Brilliance project will enable the Nangang ro-ro terminal to play to its strengths in land space, geographical position, favourable policies as well as its multimodal practice,” said Yuan Guohua, chief executive officer of Lingang Group.

Lingang Modern Logistics is newly founded and its partnership with Changjiu to service BMW-Brilliance at Nangang is its first major project. The company has ambitions to work with Changjiu to create a vehicle hub for transport by water and rail, as well as serving as a distribution centre for vehicles and automotive parts for eastern China.

"The BMW-Brilliance project provides a key opportunity for the partnership between Lingang Group and Changjiu Logistics to work towards developing the largest multi-purpose auto logistics hub in the east China region." - Bo Shijiu, Changjiu Logistics

As China is on the verge of enforcing new car-carrier regulations, logistics experts continue to emphasise the importance of developing multimodal logistics corridors. Ma Zengrong, general secretary of the Chinese Automotive Logistics Association of the China Federation of Logistics and purchasing, an important Beijing-linked industry group, said the country would soon see a new “industrial upgrading’, primarily featuring a multimodal transport system.

“BMW-Brilliance’s strength in supply chain management, Changjiu’s network control and innovation capability, plus Lingang Group’s existing equipment resources and its technology development ability are likely to work together to help generate a new platform and opportunity for further impressive growth in the sector,” he said.

For more on Chinese automotive logistics, including changes to regulatory policy, read our coverage from the Automotive Logistics China conference held in April in Chengdu.