Chevy Stingrays arrive at US dealers 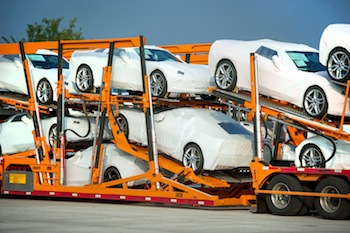 GM’s Chevrolet division has begun delivering the 2014 Corvette Stingray Coupe to dealers in the US from its Bowling Green assembly plant in Kentucky.

The carmaker is using vehicle haulier Jack Cooper Transport to deliver the vehicles, which are being shipped by road to dealers across the country via Nashville where the GM has a quality assessment centre.

“It’s an amazing sight to see the transporters filled with Stingrays heading to customers in all corners of the country,” said Dave Tatman, plant manager of the Bowling Green assembly plant. “The pride at Bowling Green is overwhelming and it shows in the tremendous quality and attention to detail going into each one of these new Corvettes.”

GM also has plans to meet demand for the Stingray in export markets.

Bowling Green Assembly, which has built the vehicle exclusively since 1981, has so far produced approximately 1,000 of new Stingrays for customer deliveries. This is the seventh generation of the vehicle and they are now arriving at dealerships. The company would not confirm planned output of the Stingray but said that for the 2013 model year it sold 14,000 in the US.

To expedite delivery of the new model, vehicles may be shipped out of build sequence, which allows Jack Cooper Transport to maximise the efficiency of deliveries said a spokesperson for the carmaker. Once through the quality assessment stage the vehicles are loaded according to destination, something that is evaluated on an almost hourly basis according to the company.

To maintain quality during delivery GM is using '2T' transit covers supplied by Italian supplier Covercar. The waterproof fabric cover means the vehicles do not have to have wax, resins or other potentially toxic protective substances applied.

The Bowling Green facility underwent a $131m upgrade to support production of the Corvette Stingray, including approximately $52m for a new body shop to manufacture the car’s all-new aluminum frame in-house for the first time.