China conference: Looking ahead to a more multimodal future 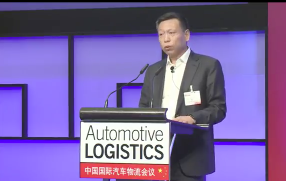 According to industry forecasts from China’s State Information Centre, the country can expect vehicles sales to hit 40m by 2025.

However, the 28m vehicles that were moved between the factory and the dealer last year – a 14.5% increase on the previous year – and the parts being moved into the factories to make them, were already more than one mode could possibly manage alone. There needs, therefore, to be strong diversification across the modes to meet customer expectations, as speakers highlighted during the first day of this year’s Automotive Logistics China conference being held in Shanghai.

The increase in sales in China came in the second part of 2016 and caught many by surprise, according to Bo Shiju (pictured), chairman of Changjiu Group, one of China’s biggest logistics providers and the only one to have gone public on the Shanghai stock exchange. He said a lot of OEMs and dealers were not prepared. However, he emphasised how “honesty and credibility” were crucial to getting through the sudden increase in demand for services.

“In the second part of last year, there was a sharp increase in sales volume and we were under great pressure,” he said. “We prepaid our suppliers, made price adjustments and kept our promise to the OEMs. Later, we were proved to be right and didn’t lose any market share and coordinated transport capability with our OEMs. We also gained a lot of new customers, who then considered us as strategic partners and gave us a lot of business.”

While that increase was sudden, overall China’s economy has stabilised and vehicle production volumes will beat the GDP growth rate in China this year according to Cai Jin, vice-president of the China Federation of Logistics and Purchasing (CFLP). Importantly, logistics costs have been brought down, according to Cai. Logistics costs in 2016 amounted to 11 trillion renminbi, or 14.9% of GDP, which was lower in total than in 2005, when it was 16%. That drop has continued in the first quarter of this year.

Passenger cars account for 87% of the market, with commercial vehicles making up the rest. But a combination of regulatory change affecting the dimensions of the road transporters moving those vehicles to the dealers and a growing trend for larger SUVs, combined with the steady growth in volumes, means that carmakers and their logistics providers are looking for greater use of other modes, including inland waterway and rail.

Rui Zhu, logistics director at Chery Jaguar Land Rover, said that last year, the SUV was steadily rising in popularity; taking the month of June as an example, he said the model accounted for 40% of passenger car sales.

“The star model for the year was the SUV and its share of the market has increased for three consecutive years,” said Rui. “Compact cars, by comparison, saw their market share shrink.”

The problem there is that the larger-sized SUVs and longer premium vehicles obviously have a lower loading ratio than smaller passenger cars and their gain in popularity comes at a time when China’s Ministry of Transport is bringing in strict regulations on the loaded dimensions of car carriers – a move that will reduce capacity even for the smaller vehicles being moved. The GB1589 regulation, for example, which will be enforced from August 2018, will restrict the height of a loaded trailer of cars to 4 metres (with maximum loaded length of 16.5 metres).

“When the truck is fully loaded the height is about 4.4 metres,” said Bo. “That exceeds the statutory limit but Chinese regulations said that the limit of the height is applied to the loaded vehicle itself. I don’t think pushing the height to 4.2 metres can help solve the problems. We are still willing to negotiate with the authorities [but] our point of view is that the height limit should go to 4.5 metres.”

On the other side of the argument, Zhang Xiaodong, professor of traffic and transportation at Beijing Jiao Tong University, said the regulation should be strictly enforced from the beginning.

“If you make it 4.2 or 4.5 metres and the driver is not familiar with it, there will be problems on the road,” he said. He added, however, that once enforced at 4 metres, there could later be scope to negotiate for a 4.5 metre standard.

However, Zhang also said there were issues related to the GB1589 regulation that affected how the carriers would cope with the different types of vehicles coming onto the market and how this would work out in terms of connecting volumes transported by road with other modes.

The adoption of other modes, including inland waterway and rail, is something of a priority for the industry and the government alike. As many as 18 different government agencies have been discussing the issue, according to Zhang, and the government has already run 16 pilot projects, though he lamented the fact that none of these involved an automotive logistics provider

“That doesn’t mean the auto industry is doing badly with it,” he added. “There are some good experiences but it is true that we need to pay more attention to long-term planning.”

A second batch of multimodal projects is due to be announced in the next few weeks.

“I hope this year, when the pilots are rolled out, there will be automotive logistics companies involved,” commented Zhang.

Using the waterwaysGreater adoption of multimodal delivery is certainly something CJLR is looking at independently. Rui said that river transport, to take one example, was 50% of the cost of moving vehicles by road and that it offered savings elsewhere in terms of freeing up truck assets to collect more cars and acting as a storage option, rather than spending money on storage at a cross-dock.

“Our inventory is safe for one week and we can put this on ships roaming on the Yangtze River,” he pointed out. “I don’t have to rent an extra 30,000 sq.m of warehouse space to keep the inventory safe.”

The carmaker has conducted a market survey looking at four different options involving mixes of road, waterway and the distribution centres in Tianjin and Shandong. And it was not only motivated by cost.

“The driving force for this move was not just cost but satisfaction for the customer,” he said. “Dealers are fragmented in vast provinces with small orders. If you transport on land, it adds to the cost, but putting it in a distribution centre, it is more concentrated. We will provide faster response to the dealers.”

Rui also pointed to the option of rail and his previous experience at BMW Brilliance, which ran the first express rail service between Germany and Shenyang for spare parts movements.

“When I went to CJLR, I was thinking how to introduce the rail model to the new company because my experience with BMW was successful and would add flexibility for the OEM because it was faster than ocean and less expensive than air freight,” he said.

However, rail infrastructure serving inland regions in China needs a lot of development.

“Rail is definitely an option but there is no rail infrastructure from our facility [in Changshu]; we cannot implement this in the short term,” he said. “Using rail in the strategy will be more between 2020 and 2025.”

That highlighted Zhang’s point that any move toward a greater adoption of multimodal transport had to include an emphasis on seamless connections between different modal infrastructures, something that “really needed improvement”.