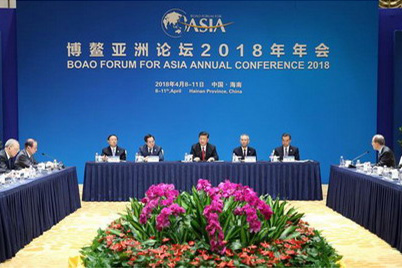 China’s Ministry of Finance has announced that import duty on foreign-made cars will fall from 25% to 15% with effect from July 1, with tariffs on automotive parts dropping from around 10% to 6%.

The move delivers on a promise by China’s president Xi Jinping last month that the country would reduce duty on foreign-made cars as part of wider efforts to increase imports.

The Ministry echoed points made by Xi at the recent Boao Asian economic forum in April (pictured) that the cuts were part of an effort to open China up more to international trade and reduce its trade surplus with other countries.

The move to reduce duties in July brings forward a more general target to reduce tariffs on imported cars to 15% over the next five years announced by Huang Yumei, vice-director of the Information Resources Development Department at China’s State Information Centre, at the recent Automotive Logistics China conference in Chengdu. Huang said the country was adapting its international trade policy to move ahead and open its market to the world, something she described as a “mega-trend” for China.

The lowering of tariffs is expected to benefit high-end manufacturers such as Audi, BMW, Mercedes-Benz and Tesla.

Asked about the cut in tariffs, BMW said it would wait for the new rates to become law before commenting on the implications for its imports of finished vehicles into China and for the import of parts by its joint venture with Brilliance Automotive Holdings, BMW Brilliance.

Despite the imminent cut, China's duty on imported cars will remain relatively high. The US currently applies a tariff of just 2.5% on vehicle imports while the EU charges 10%.