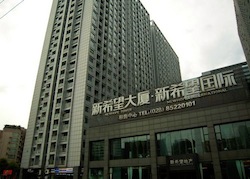 China’s New Hope Group has signed an agreement with car retailer E-Kingo Automotive Trade to jointly build 200 ‘dealer plazas’ in China. New Hope Group, which is owned by self-made, pigfeed billionaire Liu Yonghao, has business interests in chemicals, real estate and financial services but this is the first foray the company has made into vehicle distribution. Total investment in the project is expected to reach 200 billion yuan ($32 billion) according to a statement from E-Kingo.

The company said that the plan is to build the dealership network over the next five years across second, third and fourth tier cities, mainly in China’s Midwest region.

In an interview with news source Bloomberg, E-Kingo’s vice president Liu Wei said that both companies saw great opportunities in the vehicle distribution and services business and would release a business plan when operations started, though no date was given.

Both companies have been in fairly secretive talks about prospects in the automotive sector since February. In a company statement E-Kingo’s chairman Huang Jiango said Liu believed the automotive market in China was ready to transition from a profit-driven industry based on vehicle sales to one based on the aftermarket value chain. The two companies have therefore agreed that the aftermarket will be the focus of their initial collaboration.

This tallies with comments made earlier this year by analysts at Automotive Logistics China who pointed to the fact that as the country’s industry matures the aftermarket will become the major area of profitability and is already significant.

There were a 100m passenger vehicles on the road in 2012 and 100m more vehicles and motorbikes sharing those roads.

Given the price wars, high inventory and overcapacity in the new car market, Jesse Hu, senior project manager at analyst Technomic Asia, suggested there is more potential in the aftermarket.

“We can conclude that the golden period of car sales in China has passed and we should shift our attention from car sales to the aftermarket,” she said.

She predicted that the aftermarket would grow faster than the new vehicle market in the coming years. Logistics providers were already enjoying an 18% annual growth rate in the sector, she said.

Early reports on the plans drawn up by New Hope and E-Kingo suggest that their business model will go beyond the services normally associated with a dealership. Under the concept of what is being called New Kingo Automotive Town, the dealer plazas being planned will not only cover car sales, accessorisation, upholstery and remodeling, but also include hospitality and involve hotels, catering, entertainment and tourism.