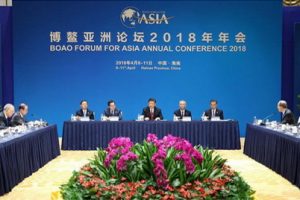 China’s president Xi Jinping has said the country will greatly reduce its current 25% duty on foreign-made cars as part of wider efforts to increase imports and reduce its trade surplus with other countries.

“This year we will significantly lower import tariffs for vehicles and reduce import tariffs for some other products,” said Xi in a keynote speech at the annual Boao Asian economic forum held on Hainan Island, south China, recently. “We will work hard to import more products that are competitive and needed by our people.”

The country has already opened up in the manufacturing sector, except for cars, ships and aircraft.

“These industries are now in a position to open up,” said Xi.“Going forward, we will reduce, as soon as possible, limits on foreign investment in these industries – cars in particular.”

Under current legislation, foreign OEMs wanting to manufacture vehicles in the world’s largest automobile market are required to form a joint venture (JV) with a local partner, with their ownership capped at 50%. A foreign company can have a maximum of two JVs making the same category of vehicle in China.

Xi also said the government would strengthen intellectual property rights (IPR) protection for foreign companies operating in China as well as sharply increase the costs of infringement. Protecting such rights would provide “the biggest boost” to enhancing the Chinese economy’s competitiveness, he argued.

He went on: “I would like to emphasise that we will implement these major opening-up measures as soon as possible... so that their effects will benefit Chinese companies and Chinese people as well as firms and the people of different countries at an early date.”

Although what he said marked no major shift in the policies Chinese officials have promoted in recent years, analysts interpret his comments as a signal that China is willing to address US concerns amid heightened trade tensions. The countries have threatened to impose $50 billion of tariffs on each other’s goods, including vehicles and automotive parts.

While the liberalisation promised by Xi will potentially benefit carmakers worldwide, much of the subsequent commentary has focused on the impact for US-made cars. Their sales of 266,600 last year were less than 1% of a 28.9m-strong market in China. Total imports of 1.22m vehicles represented just 4.2% of Chinese sales.

According to analysts at LMC Automotive, BMW sold the most US-made cars in China last year, followed by Mercedes-Benz, Ford, Fiat Chrysler and Tesla. The majority of those vehicles are at the luxury end of the market, as fewer top-end cars are made in China.

With the US and China threatening tit-for-tat tariffs after President Donald Trump imposed levies in March of 25% on steel and 10% on aluminium from most countries, there is a certain irony in Xi’s pledge to reduce import levies on cars, say some commentators, as it could boost sales in an existing market for US-made cars and feed through to more investment in US plants.

By way of comparison, Chinese-made cars currently attract a tariff of just 2.5% on import into the US.