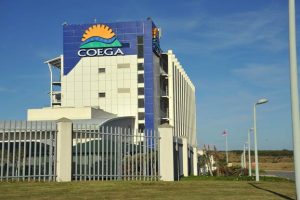 Beijing Automobile International Corporation (BAIC) has signed a deal with the Coega Development Corporation (CDC) in South Africa to build an 11 billion rand ($800m) plant for the assembly of complete knockdown (CKD) kits of pick-up trucks, SUVs and sedans. The plant is expected to open toward the end of 2017.

It is the biggest automotive investment in Africa in the last 40 years, according to the CDC, and will create more than 2,500 jobs directly. BAIC’s intention to build in South Africa was first reported in April this year and details of the plans were included in the latest edition of Finished Vehicle Logistics magazine.

BAIC is China’s fifth biggest carmaker and has important domestic joint ventures with Hyundai and Daimler. Now it is trying to expand on a global stage.

The plant will be built in the Coega Industrial Development Zone (IDZ), which covers 11,500 hectares in Port Elizabeth. It is strategically located adjacent to the deep water port of Ngqura, a few kilometres away from Port Elizabeth, which has container, car, break-bulk and bulk terminals. The Coega IDZ is already home to a number of carmakers and their tier suppliers, including GM South Africa.

The Chinese carmaker’s investment is an outcome of the Forum on China-Africa Cooperation (FOCAC), which was held in Johannesburg in December last year. At the Forum, South Africa’s president Jacob Zuma and Chinese prime minister Xi Jinping signed 26 bilateral agreements valued at approximately 100 billion rand.

“The size of this investment demonstrates confidence by China and confidence in South Africa as an investment destination,” said Dr Rob Davies, South Africa’s minister of trade and industry. “The investment is strategic and is a major project in terms of our bilateral relationship and a key project supported by the Inter-Ministerial Committee (IMC) on Investment.”

The South African government wants to encourage new OEMs and suppliers to South Africa and is doing so through a mix of subsidies and investment support. The main channel is its Automotive Production and Development Programme, a baseline policy governing a system of credits for importers who also export. It was updated last year to lower the production threshold to 10,000 units a year from 50,000 and, as a result, it has improved the country’s attractiveness to lower-volume exporters.

The CDC said it had plans to establish a “multi-OEM complex” for the automotive assembly and components manufacturing sectors in Zone 2 of the IDZ. It has earmarked 306 hectares of land for automotive manufacturing activity through its recently unveiled five-year strategic plan, which will embrace an OEM industrial clustering approach.

BAIC is not the first Chinese carmaker to build a plant in South Africa. Back in 2014 First Automotive Works (FAW) opened a 600m rand truck plant in the country, also in the Coega IZD. That is making 5,000 medium and heavy trucks annually, with 40% sold in South Africa and the rest exported to other countries and other regions in Africa.