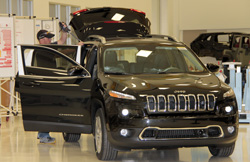 Chrysler has said that it will temporarily suspend the second shift at its Toledo North assembly plant, which is making the Jeep Cherokee, to avoid putting “additional strain” on its logistics providers tasked with delivering the vehicles upon release.

Chrysler has been making the Cherokee, which is replacing the Jeep Liberty, at the Toledo North facility since the end of June and said in a statement  that it had reached the critical volume needed to stock dealerships. At the end of August it had produced 9,430 units a spokesperson told Automotive Logistics, admitting that storage space was becoming an issue. The carmaker is aiming at annual production of 280,000 Cherokees for sale in 150 markets.

In July the company had to delay shipments because of recalibration work that was needed on the new nine-speed transmission used in the SUV. A spokesperson is quoted in the Detroit Free Press as saying the company would only release the Cherokee once it was satisfied with the level of quality “and not a day before”.

Chrysler would not confirm what its logistics plans were for maximising the efficiency of the outbound movement of the Cherokee volumes once released, nor which logistics providers it was working with, but said transport of the vehicles would be by road and rail for the most part.