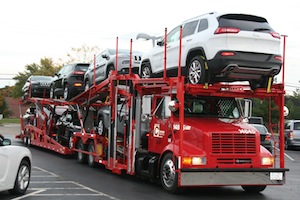 Chrysler has finally begun shipments of the Jeep Cherokee to US dealerships from its Toledo North plant in Ohio. The Cherokee is replacing the Jeep Liberty but dealers have been waiting for the new vehicle for more than two months as the company worked on recalibration work to the vehicle’s transmission. The company would not confirm the schedule of shipments being made to fulfil demand.

The movement of the vehicles, which is being handled in part by road haulier Cassens Transport and began on Tuesday 22, will ease storage problems that have arisen at Toledo where volumes have built above 9,500 units. Chrysler has been making the Cherokee at Toledo since the end of June.

In September the carmaker said it was temporarily suspending the second shift at the Toledo North plant to avoid putting “additional strain” on its logistics providers tasked with delivering the vehicles upon release.

However, the carmaker said this week that the second shift had been reinstated on September 30. Asked how the ‘additional strain’ was being dealt with since the reintroduction of the second shift, Chrysler said it would not provide details on its shipping process.