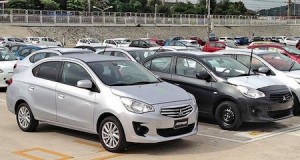 [This story was updated on Thursday 10 July] Chrysler will start selling a Mitsubishi compact sedan based on the Attrage in Mexico from November this year following a five-year deal signed between the two carmakers. The vehicle will be built in Thailand, at Mitsubishi’s assembly plant in Laem Chabang, and shipped to the US by SIEM Car Carriers. Chrysler is the sole distributor of Mitsubishi vehicles in Mexico and has been since 2003.

The vehicles are being delivered to Lazaro Cardenas port in Mexico. Inland distribution in Mexico is being handled by Grupo Tracomex, which hauls 100% of Chrysler volumes to dealers in the country.

The car will compete in the B segment, one of the largest in the Mexican market according to Mitsubishi, representing 23% of the market with sales of more than 250,000 during 2013.

"This new contract reaffirms the strong relationship that Chrysler de Mexico has built with Mitsubishi Motors Corporation since 2003 when we began distributing Mitsubishi vehicles in our country, which have garnered great acceptance in the Mexican market," said Bruno Cattori, president and CEO of Chrysler de Mexico "With the introduction of this new compact sedan, Chrysler de Mexico will add a very competitive vehicle to its line up to fulfill customer's needs," Cattori added.

The move to produce at Laem Chabang for export to Mexico will help support the plant in Thailand as domestic sales there have fallen for Mitsubishi. Last year the company started exports to the US from the plant with the Mirage.

Quoted in a report by news agency Reuters, Osamu Masuko, Mitsubishi’s CEO said: “Our Thai business has not necessarily gone the way we had hoped for due to political and economic conditions, but by sending these vehicles to Mexico, we can maintain production levels.”