Chrysler will ship 800k transmissions from Tipton to global facilities 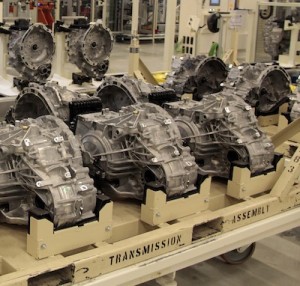 Chrysler expects to be shipping 800,000 transmissions out of its new plant in Tipton, Indiana when it reaches full capacity. The facility is set to become a global hub for the nine-speed transmission made there and units will be sent to Toledo, Ohio, for use in the Jeep Cherokee and Sterling Heights, Michigan for the Chrysler 200. Outbound shipments to Chrysler's plants in North America are being handled by Chrysler Group Transport, though Union Pacific intermodal group is managing the lane to Saltillo Truck plant.

The transmissions will also be shipped further afield to Fiat plants around the world, including: Melfi, Italy; Tofas, Turkey; Pernambuco, Brazil; and to China. The company stated that there was potential to expand production to other international facilities as needed. International shipments are being transported via the ports of Montreal and Long Beach according to Chrysler.

Production of the first nine-speed transmissions began in May 2013 at Chrysler Group’s Indiana Transmission Plant I (ITPI). The opening of the Tipton facility represents phase two. This brings with it additional work for three of the company’s facilities in Kokomo. Castings for the new transmission will come from Kokomo Casting; machining of the prismatic parts – housings, blocks and heads – will be done at Kokomo Transmission; and the rotating parts – gears and crank shafts – will come from ITPI. All will be shipped to Tipton for final assembly with the majority of shipments handled by ISI.