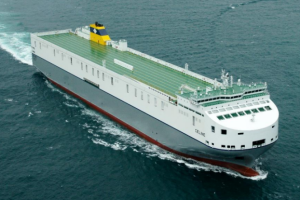 European short-sea operator CLdN has put its newest vessel, MV Celine, into operation for vehicle shipments between Belgium, the Netherlands, Ireland and the UK.

The Celine is the first of a new generation of ro-ro vessels CLdN is expanding its fleet with and was delivered from the Hyundai shipyard in South Korea in the last week of October. It has capacity of 2,000 vehicles while simultaneously carrying other freight units and is capable of running on liquefied natural gas (LNG).

“We are delighted to welcome the first of 12 eagerly anticipated vessels in our previously announced fleet enhancement strategy,” said a spokesperson for the company. “When a vessel is designed and ordered, waiting some two years for her to be delivered adds to the eagerness but we can say, with the Celine’s arrival, we will now see the regular introduction of new vessels, meaning the wait is finally over.”

The company would not divulge the investment involved in the new vessel but said the addition of 12 new vessels to the fleet made it obviously significant. The second vessel is already afloat, according to the company, and will be delivered in 2018.

The Celine will be deployed on a rotation taking in the ports of Zeebrugge (Belgium) and Rotterdam (the Netherlands), along with Dublin (Ireland) and Killingholme (UK).

CLdN said it had seen significant growth in its service between the European continent and Ireland and was supporting shipments for a majority of the carmakers based on the continent, as well as vehicles coming from Scandinavia and the Mediterranean, the US and Far East, which are transhipped from deep-sea routes at Zeebrugge and Rotterdam.

The service will combine finished vehicles, containers and trailers, allowing it to maintain service frequency despite fluctuations in demand for each.

“The strength of CLdN’s operation to Ireland is that it carries trailers, containers and cars in combination,” confirmed the spokesperson for CLdN. “The Celine adds to this capability massively. However, the true strength of CLdN’s operation is that the service frequency is maintained, even when car production volumes are low, due to year-round trailer and container demand.”

The ports that the Celine will call at are investing in berth and landside upgrades, including at the terminals that CLdN’s sister company, C.Ro Ports, operates in London, Rotterdam and Killinghome. Both companies are part of the Belgian maritime logistics operator, Cobelfret.

At the port of Zeebrugge, the service has shifted berth to the newly opened Albert II facility, allowing for future expansion of the service. The port of Dublin is also investing in its facilities to manage deliveries on this service.