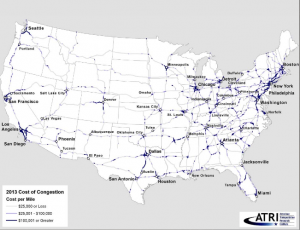 The American Transport Research Institute (ATRI) has released analysis on US interstate highways that shows that congestion added $9.2 billion in operational costs to the trucking industry last year. Looking at financial and GPS data, ATRI found that there was a total of 141m hours of lost productivity, which it said equated to over 51,000 truck drivers sitting idle for a working year.

According to the analysis, California led the US with over $1.7 billion in costs, followed by Texas with over $1.0 billion and New York state $845.5m.

Unsurprisingly, congestion was seen to be most severe in urban areas, with 89% of the congestion costs concentrated on only 12% of the interstate mileage.

The Los Angeles metropolitan area saw the highest cost at nearly $1.1 billion, and New York City followed with an incurred cost of $984m. Chicago followed those two, with just under $467,000 in additional cost.

“Congestion is an unfortunate byproduct of our just-in-time economy, and it’s a significant roadblock to our country’s productivity as well as its global competitiveness,” said Jack Holmes, President of UPS Freight. “ATRI’s analysis quantifies congestion in a way that clearly shows the urgent need for highway investment.”