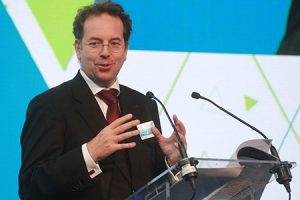 The growing penetration of aluminium in vehicle manufacture is changing the landscape in the automotive industry, Arnaud Jouron (pictured), president of Constellium’s packaging and automotive rolled products business unit, has suggested.

Speaking to Automotive Logistics soon after the Dutch company inaugurated a €180m ($196m) integrated aluminium rolling, finishing and recycling line at its Neuf-Brisach plant in Alsace, eastern France, Jouron said: “Aluminium’s light weight is proving to be a game-changer in car design, economy and reduction of CO2 emissions. It is much lighter than the components it can replace in a car and is clearly becoming the material of choice for carmakers that are currently undergoing regulatory pressure to produce more environmentally-friendly vehicles.”

Those pressures on carmakers will increase in the coming decade as regulators bring in stringent rules and standards requiring significant improvements in fuel efficiency, he said. Meanwhile, consumers are becoming increasingly sensitive about climate change, greenhouse gas emissions and fuel consumption.

The result is that a growing number of global OEMs are integrating higher volumes of aluminium into their vehicles, said Jouron.

The change has been felt more in Europe than elsewhere so far because legislation was enacted in this region earlier, he continued. But the North American auto sector will soon be an even bigger consumer of aluminium.

The investment at Neuf-Brisach is part of Constellium’s response to those changes and will “significantly boost” the plant’s automotive body sheet production capacity to meet anticipated market growth, Jouron said.

The new finishing line is 240 metres long with an annual capacity of 100,000 tonnes. The use of the latest technologies on the line will enable greater flexibility in the thickness of processed alloys for automotive closure inners, outers and body-in-white, said Jouron.

The line has already started commercial production and should be brought to full capacity by the end of 2018.

Product developmentWhile steel producers are constantly coming up with lighter, stronger varieties of their material, such as advanced high strength steels (AHSS) and ultra high strength steels (UHSS), to hold on to their market share and help reduce overall vehicle weight, aluminium continues to offer some unique performance characteristics, including its recyclability, said Jouron.

“As proof, we’re seeing growing demand for aluminium automotive body sheet and structures,” he noted. “There are car components such as external parts (bonnets, doors and wings) where aluminium is used more and more by OEMs.”

Constellium places great importance on R&D and is also working on a number of new alloys for future use, he said.

“We are working on developing the alloys and products of tomorrow via our technology centre in Voreppe, France,” Jouron said. “We are also forming new partnerships with leading auto manufacturers, universities and research centres to develop the solutions that will meet our customers’ future needs.”

The Neuf-Brisach inauguration comes a month after Constellium and Japanese partner UACJ opened an aluminium sheet rolling plant in the US in Bowling Green, Kentucky, following a two-year ramp-up. Annual capacity there will be 100,000 tonnes. Targeting North American carmakers, its output will be used in automotive closure panels and body structures.