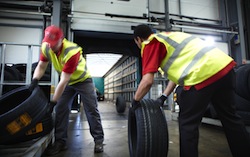 Continental Tyres has renewed its contract with transport and logistics provider Norbert Dentressangle in the UK for a further five years and has expanded the scope of logistics operation to include consolidation services.

Norbert Dentressangle has been working with Continental Tyres since 2006, and its facility in the Midlands at Rugby already operates as a national distribution centre (NDC) for the tyremaker’s activity in the UK and Ireland. Under the new contract, the Rugby centre will also act as a consolidation point for tyre orders that were previously delivered as full loads direct from Continental’s manufacturing plants in Europe to major wholesale customers in the UK.

Norbert Dentressangle is now responsible for building customer orders from stock held in the consolidation point, which it said will improve lead times and service levels.

“In some cases, product which comes into the consolidation centre will also be consolidated with orders being fulfilled from the NDC, further improving the utilisation of the UK delivery fleet,” said the company in a statement.

The logistics provider will establish an additional 930-square-metre area within the warehouse to accommodate the additional volumes, storing more than 30,000 units and handling almost 1.5m tyres per year. This brings the total area to around 12,000 square metres and able to handle around 2.7m tyres per year, including Continental’s range of passenger car, truck and fork-lift truck tyres.

The Rugby site, which went into operation in 2011 when Dentressangle moved storage and distribution from Birmingham, was one of the first to benefit from Continental’s new in-house warehouse management system, according to the company. The system has been interfaced with Norbert Dentressangle’s own SHARP3 transport planning system, providing real-time visibility and control throughout the supply chain. Under the new contract, Norbert Dentressangle is also introducing RF technology across the enlarged operation to further enhance efficiency and accuracy in the warehouse.