Cordero leaves FMC to lead the Port of Long Beach 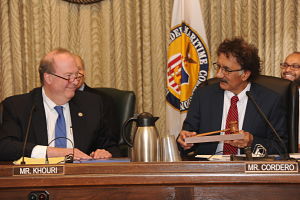 Mario Cordero (pictured, right) has been appointed as executive director of the Port of Long Beach in California, the second busiest container port in the US.

He is leaving his role as a Federal Maritime Commission member having served as chairman for almost six years until January, when US president Donald Trump appointed Michael Khouri (pictured, left) as acting chairman.

Cordero, who previously served as a commissioner of the Port of Long Beach, will replace Duane Kenagy, interim executive director since September 2016.

"It has been a privilege to serve on the Federal Maritime Commission these past six years, and it was a distinct honour that during my tenure I was entrusted with the chairmanship of the agency," said Cordero in a statement.

On his new appointment, he said: “The broad perspective I gained at the national level, along with my many years of service as a Long Beach Harbor Commissioner and my love for the community of Long Beach, will allow me to hit the ground running.”

As chairman of the FMC, Cordero previously spoke of the need to address the recurring problem of congestion at US ports and its negative impact on growth and trade.

At the Finished Vehicle Logistics North America conference in California in 2014, he cited one economist who suggested that the greatest threat to international trade in the US was not terrorism, but a lack of infrastructure. “Keep demanding investment in it,” he said.

During his time as Port of Long Beach commissioner between 2003 and 2011, he helped to spearhead the port’s Green Port Policy, aimed at reconciling economic growth and environmental stewardship to achieve long-term, sustainable port development.

Khouri said Cordero “understands the criticality of transportation and trade to the strength of national economic competitiveness”, adding: “I have every confidence he will work tirelessly on behalf of the Port of Long Beach, its tenants, and all those who depend upon that facility to move their goods.”

Containers arriving in Long Beach with goods bound for US consumers spiked 20.2% in March compared to the same month in 2016, pushing the port to its best first quarter since 2007.