CTM and Lohr offer efficiencies for the backhaul

Constrained by low rates and a need for investment, road haulers are looking for greater efficiencies from their fleets in Russia. One area for savings that still appears to be staring the industry in the face is empty backhauls, according to Bill Pawluk, CEO of Convertible Trailer Manufacturing Worldwide (CTM). 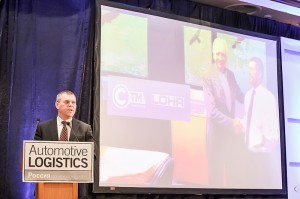 Speaking at last week's Automotive Logistics Russia conference in Moscow, he said that there was a 42% empty mile factor in the finished vehicle transport sector, the highest in the transport industry and something that was not tolerated in any other sector of the transport industry. However, it is still largely taken as read by finished vehicle carriers. Pawluk maintains that the sector is spending $50 billion a year more than necessary worldwide because of inefficiency and wasting 8 billion litres of fuel a year.

Among a number of projects now under development, CTM, in conjunction with equipment provider Lohr Industries and a leading carmaker, are looking at moving vehicles from the carmaker’s plant in Valenciennes in France to the Polish market. Converting the trailers for the return 1,000km leg, the plan is for the trucks to load engines into its Autobox containers from the carmaker's plant in Walbrzych for delivery back to the Valenciennes plant. This would equate to 100% loaded miles. Around 17 convertible trucks are expected to be used on the project. Pawluk said such solutions were available to the Russian market.

Lohr signed a partnership agreement with CTM back in March to produce trailer equipment able to handle both finished vehicles and a range of other general cross-industry freight, including containerised parts. The companies have also developed a convertible high mount trailer for the movement of containers.