Daimler chooses Slovenian port of Koper for exports to Asia 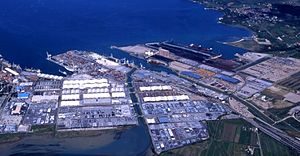 The Slovenian port of Koper has won a new tender to handle Daimler finished vehicles, shipped from Mercedes-Benz plants in Germany and south-eastern Europe.

Subject to the carmaker’s final plans, the port operator, Luka Koper, can expect to handle export volumes from southern Germany, as well as from plants in Austria, France, Hungary and Slovenia. Daimler makes the smart car at its joint ventures with Renault in Hambach, France and Novo Mesto in Slovenia.

The decision to use Koper is the result of the company’s Med Port Concept Study according to a source within Daimler's global vehicle transportation department. That project is running in two phases, with the first focused on volume exports to China and phase two, which will begin next year, including other markets in the Far East.

Daimler would not confirm the projected annual number of vehicle exports or which ports were previously handling the traffic, though it is believed most currently move through northern German ports.

Daimler will move the cars by rail to the port from plants in Germany and Austria on a route that passes through Austria. Koper currently has two daily rail services to Munich. The carmaker has not confirmed the routes from the plant in Hungary but these are also expected to move by rail.

The port of Koper is believed to have beaten the Spanish port of Barcelona and the Italian port of Savona, which had also vied for the contract.