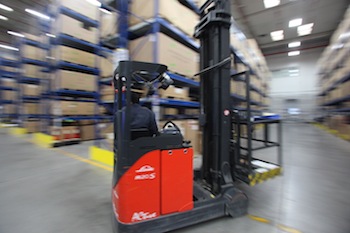 Daimler is opening a sixth logistics warehouse in China in 2014 for the handling of Mercedes Benz car, van and truck parts in the country. The custom-built warehouse will be located in Shanghai and operated by Daimler Northeast Asia Parts Trading and Services (DPTS), which is responsible for aftersales parts logistics. The announcement comes as the company celebrates its fifth year of logistics operations in the country.

“Our infrastructure has grown rapidly over the past five years with five warehouses in operation up to now, and will continue to grow in future: in 2014 we will open our all-new, custom-built Shanghai warehouse and so strengthen our Chinese footprint furthermore,” said Jan Fischer, CEO of DPTS.

The existing warehouses cover more than 120,000 square metres together and are located in Beijing, Chengdu, Guangzhou, Shanghai and Yangzhou. They stock more than 50,000 parts worth around RMB 1.3 billion ($205m), and last year combined handling of customer orders reached 3m. Parts are delivered on routes that stretch as far as 4,000km. DPTS serves passenger car dealers as well as Mercedes-Benz van and truck outlets and reports a service level beyond 96% requested parts in stock.

Daimler has expanded the Mercedes-Benz dealer network in China. In 2013 it opened 75 new dealerships, 36 of which were in cities where the brand had not been represented before. The smart dealer network is also growing and by the end of the year there will be around 100 sales and service outlets in 70 Chinese cities according to the company.

Together with the Chinese Partner BAIC, Daimler also plans to investment around €4 billion ($5.4 billion) over the next few years to expand local production in the country and build a new engine plant.