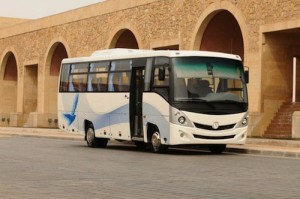 Daimler Buses has started exporting bus chassis from India to Egypt for final assembly by its partner, MCV, which will fit bodies to those chassis at its facility in Cairo. The vehicles will be sold as Mercedes-Benz brand buses through MCV’s sales network in the country. Daimler said sales figures will depend on demand and for the time being it has planned to export a three-figure number.

“With the Chennai-produced bus chassis, we are able to enter the developing low-cost segment of robust and reliable buses in Egypt – a segment in which we had not been present before,” a spokesperson told Automotive Logistics. “The additional volumes produced in India exploit further export opportunities and exemplify how we make use of our global production network to tailor our products to the specific needs of our customers.”

The OF 9-tonne bus chassis, with front-mounted engines, are manufactured at the Daimler India Commercial Vehicles (DICV) plant in Chennai and transferred to the nearby port for onward transport to Egypt. Daimler is moving the chassis using a truck-on-truck method but would not disclose the transport provider.

According to Daimler the chassis are similar but modified versions to those used in the medium-duty BharatBenz trucks, which are also produced at the DICV plant in Chennai. This meant that Daimler was able to begin with exports before the bus plant was completed at the Chennai site said the company.

Construction of that bus plant, which started in March 2014, is continuing following an investment by Daimler of around €50m ($56.5m). The company expects to begin producing Mercedes-Benz and BharatBenz buses at the plant at the end of the second quarter this year. It will have an installed capacity of 1,500 vehicles per year in the initial phase, and this could be expanded to 4,000 units subsequently.

Daimler said it plans to include additional export markets in its sales network at a later date.