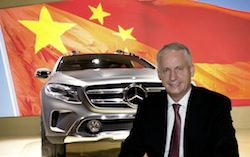 Daimler has announced plans to invest €2 billion ($2.7 billion) in doubling capacity for vehicle production with its joint venture partner in China, BAIC, in a bid to challenge its competitors Audi and BMW. The investment will go into expanding production at Beijing Benz Automotive Company’s (BBAC) existing plant in Beijing, which began production in 2006, and will include production of the GLK, which started in 2012.

A portion of the financing will also cover the cost of a larger second plant, also in Beijing, for the production of compact vehicles, including the GLA, to be operational by 2015.

Investment will also be made in the company’s engine plant, assembly of which began in May this year. It is the first engine plant for Mercedes-Benz outside Germany and will mainly support local production, though Daimler said it is planning export engine parts to Europe to equip German-made cars, starting from next year.

In addition, Daimler is building a research and design facility. Taken together it will be Daimler’s biggest production facility globally.

Last year the company sold more than 200,000 cars in the country, its third-best selling market after Germany and the US. However, fewer than half were made by the joint venture in China, a local production rate below that of its fellow German rivals in the market who are selling 100,000 more vehicles each per year in the market.

Daimler said it now aims to boost Mercedes-Benz’s sales network in China and become the top-selling carmaker in the country.

Volkswagen’s Audi reached sales of 300,000 in 2011 and BMW reached the same figure last year. According to figures given to Automotive News China by market analyst LMC Automotive, this equated to a rise in sales of 32% for Audi, whilst BMW’s volume increased by 41%. In sharp comparison, Mercedes’ sales rose by just 4%.

China continues to be a growth market for the automotive industry and Daimler’s investment is expected to serve as an incentive to increase sales and raise its image in the country.  Since the start of 2012, it has struggled as the demand for luxury cars plummeted due to the economic problems faced in the country. However, it intends to match its competitors’ sales figures by 2015, and will introduce 20 new or upgraded models by this time in order to boost sales. The carmaker aims to reach a 33% increase in sales by 2015 as a result of far higher levels of production and innovative designs.

According to the company, only a third of the parts required for this increase will be imported from its overseas facilities.

Hubertus Troska, the new head of the China business (pictured), told news source Bloomberg that the plant will allow Daimler to double the number of units it produces to more than 200,000 a year. With such changes in place, China could become Daimler’s largest market as early as 2015.

Troska claimed that the initiative will commence with the launch in China of a redesigned E-class sedan, followed by the overhauled flagship S-class sedan in the third quarter of 2013.