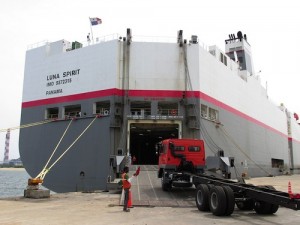 Daimler India Commercial Vehicles (DICV) and Mitsubishi Fuso Truck and Bus Corporation (MFTBC), both subsidiaries of parent company Daimler, have started shipping Fuso trucks to Indonesia from the DICV plant in Chennai. The company said it wanted to add momentum in a market where Fuso had already become the leading commercial vehicle brand with the introduction of new models that include the Canter series.

In the five-year period from 2008 to 2012, MFTBC delivered a total of 263,000 units in Indonesia marking Fuso as the number one CV brand in the market.

The new models are based on the same technical Daimler Trucks product platform as the BharatBenz marque. This enables the production of both truck brands under one roof.

The trucks are distributed in Indonesia by P.T. Krama Yudha Tiga Berlian Motors (KTB), in which MFTBC holds an 18% share. They are being moved from India to Indonesia by Nissan Motor Car Carriers.

Fuso has a 45.4% share of Indonesia’s commercial vehicle market and has sold more than 280,000 units in the country across the light-medium and heavy-duty segments.

In the light-duty truck segment, which is served by the Colt Diesel, the company attained a market share of 53% in 2013.

The new Fuso trucks are already distributed to Kenya, Sri Lanka, Zambia, Tanzania, Zimbabwe, Bangladesh, and Brunei. Plans to expand this distribution for 2014 include Thailand, Malaysia, Malawi, Mozambique, Mauritius and the Seychelles.

The company said it is combinging the strengths of MFTBC and DICV under the umbrella organisation of Daimler Trucks Asia. Through the Daimler Trucks Asia division the company plans to invest €300m ($414m) in international sales and production structures between 2014 and 2018. It added that by 2020 around 290,000 units of the Fuso and BharatBenz brands would be sold worldwide.