Daimler to start production at first Russian plant in 2019 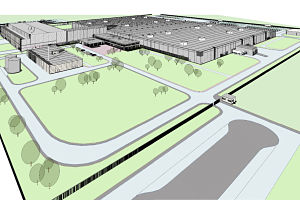 Having received preliminary approval for its first Russian production facility last year, Daimler has confirmed an investment of more than €250m ($263m) to begin manufacturing Mercedes-Benz cars in the country from 2019.

Located at the Esipovo Industrial Park, about 40km northwest of Moscow, the flexible production facility will be capable of producing SUVs and the E-Class sedan. Last year Daimler opened a new aftersales trade site approximately 20km from the planned plant (pictured).

Markus Schäfer, head of production and supply chain management at Mercedes-Benz Cars said: “By establishing a local production we do not only achieve greater proximity to our Russian customers but also strengthen the international competitiveness of Mercedes-Benz Cars.”

In 2016 Mercedes-Benz was the top-selling premium brand in Russia for the fourth year in a row and recognised in its annual report for last year that after the drastic contraction in the market in recent years, the Russian car market should recover in 2017. Vehicle sales last year for the carmaker in Russia hit almost 37,000, a decline of 11.4% compared to 2015. Given the hefty import fees to which luxury cars brought into Russia are subject, an increase in sales in the medium term could be costly, providing a stronger business case for local production.

Last year, Vsevolod Babushkin, deputy head of the department of transport and special machinery, said the project had been given preliminary approval and that the final decision lay with Mercedes-Benz.

“The investment of Mercedes-Benz in the local production of passenger cars indicates the strategic decision of a global manufacturer and his trust in the Russian market, regardless of the short-term market environment,” said Alexander Morozov, Deputy Minister of Industry and Trade of the Russian Federation.

The new passenger car plant will comprise all production steps from the body shop through paint shop to assembly and more than 1,000 jobs will be created at the site and further jobs at local service providers and suppliers, according to the company.

The company has not specified the degree to which parts will be localised in Russia, although given the relatively low volumes, a large share of parts for sedans and SUVs assembled at the plant would likely come from existing Daimler locations in Europe. Supply localisation remains relatively low in Russia even while foreign carmakers have signed a range of different targets in exchange for exemptions on import tariffs. However, the contraction of the Russian market meant some of those targets were harder to achieve for some OEMs; the Russian government has made some concessions in response.