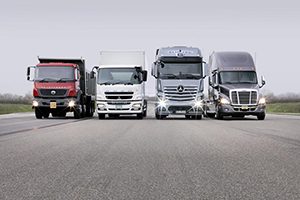 Daimler Trucks Asia has begun assembly of its Fuso range of commercial vehicles at a plant in Mombasa, Kenya, with its local partners Simba Colt and Associated Vehicle Assemblers. The Fuso 2523C heavy-duty trucks are being built up from complete knockdown (CKD) kits imported from its Oragadam plant in Chennai, India.

“We have been successfully exporting completely built-up all-new robust Fuso vehicles from India for almost three years – and now we enter the next stage, with the assembly of vehicles in Africa, for Africa,” said Erich Nesselhauf, managing director and CEO, Daimler India Commercial Vehicles (DICV).

Daimler Trucks would not disclose its planned output for the Mombasa facility. “It depends on market demand,” said a spokesperson for the company. “Africa is one of our important regions. Our newly opened regional centre in Nairobi will be responsible for sales and service for all Daimler brands in 41 markets in east, central and west Africa. We have a commitment to stay here and grow here, so we will carefully observe the situation and capture growth potential.”

Daimler said there were plans to add further models from the range to the new assembly operation in the future.

Simba Colt Motors has been a partner of Fuso for 48 years, making it one of the oldest general distributor relationships in the Daimler group worldwide. It handles the complete range of Fuso trucks and buses. AVA has been Daimler’s partner for the assembly of Fuso products imported from Japan since 1982.