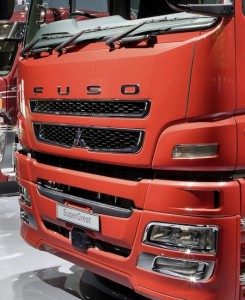 Following Daimler’s announcement last month that it will be increasing the number of regions to which it exports trucks from its division in India, the company has confirmed that shipments of its Fuso truck are now being sent to Cambodia.

“The first vehicles have been retailed and delivered to customers,” confirmed a spokesperson for Daimler India Commercial Vehicles (DICV). The vehicles include the Rigid 914 and 1217 models, along with the Construction 1217 and 2528.

In May the company announced that DICV had joined forces with Mitsubishi Truck and Bus Corporation (MFTBC) under the Daimler Trucks Asia division to expand on sales potential in new markets.

“MFTBC will service the rising demand in the Asian and African regions with its existing portfolio of Mitsubishi-Fuso trucks from its plant in Kawasaki [Japan] and the robust Fuso trucks produced at Organgadam.

DICV started Fuso exports from India in May 2013 and said that so far it has exported more than 2,200 trucks to 13 different markets that include Kenya, Sri Lanka, Zambia, Tanzania, and Thailand.

“It is planned to further increase the rollout of the export business by offering left hand drive vehicles later this year in Middle East countries like Saudi Arabia, UAE and Qatar, as well as Peru and Bolivia in Latin America,” said the spokesperson for DICV.

In April this year the company launched exports to Trinidad and Tobago, which marked the entry of DICV-made vehicles to the South America region, including right-hand-drive medium to heavy duty trucks.

In other news, at the end of last month Daimler Trucks and Buses opened a new bus plant at its Chennai production facility in the south east of the country.

“Opening another production facility and introducing a second wave of products in such a short time is another testimony for the strength of our Indian operations,” said Marc Llistosella, head of Daimler Trucks Asia. “And in combination with our worldwide FUSO network, this makes the recipe for sustainable growth at Daimler Trucks Asia.”