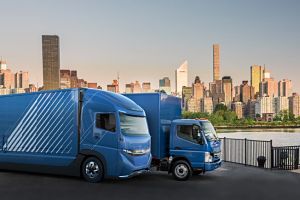 Daimler Trucks has revealed a concept E-Fuso all-electric heavy-duty Vision One truck and says a production version could be available in four years.

The E-Fuso Vision One has a gross vehicle weight of about 23 tonnes and a payload capacity of approximately 11 tonnes – two tonnes less than its diesel counterpart.

It can be fitted with batteries providing up to 300 kilowatt hours, enabling a range of up to 350km on a single charge.

While suited to long-haul work, a potential application for the Vision One is regional intra-city distribution, according to Daimler.

“Given the fact that growing customer interest, infrastructure development and regulatory efforts are likely to spur the electrification of road transport, a possible market entry for the series version of the E-Fuso Vision One could be feasible within four years in mature markets like Japan or Europe,” said the company.

The news comes just after a month after group company Mitsubishi Fuso Truck and Bus Corporation (MFTBC) launched the Fuso eCanter, an all-electric, light-duty truck (pictured). At the recent Tokyo Motor Show, MFTBC announced it would electrify its complete range of trucks and buses in upcoming years.

It also comes a couple of weeks after Tesla decided to delay the unveiling event for its electric truck to mid-November as management diverted resources to address bottlenecks in the manufacturing of its Model 3 vehicle, as well as to increase battery production for storm-hit Puerto Rico.