Dana to build axle plant to supply FCA in Toledo 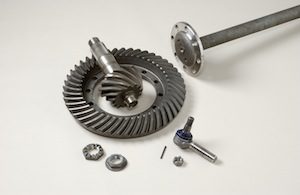 US powertrain components supplier Dana Holding is to open a new axle manufacturing facility in Toledo, Ohio next year, near to Fiat-Chrysler’s plant, following a $70m investment.

The tier one supplier said it planned to assemble “enhanced versions” of its Dana 30 and Dana 44 axles by late 2017 and that further lines were “also possible”.

The company is planning to expand a recently built 9,300 sq.m facility on a site that was previously home to Willys-Overland Motors, which developed the original Jeep. The Toledo-Lucas County Port Authority redeveloped the property in conjunction with NAI Harmon Group.

Dana said the new property, which is adjacent to Interstate 75 and favourably sited to support carmakers in the region, would be expanded to cover 28,000 sq.m.

“Dana has remained committed to metropolitan Toledo, its home, for nearly 90 years,” said James Kamsickas, Dana president and CEO. “In 2015, we strengthened our commitment to the area by consolidating numerous satellite offices in the region into our expanded World Headquarters and Technology Center in Maumee. The investment in this new manufacturing facility is another substantial example of Dana's commitment to the city and our community.”

The company said that in addition to its longstanding partnership with the Jeep brand, the expanded Toledo facility would support axle assembly for another – as yet unnamed – global automaker, which was new business. Among the other global carmakers in Ohio, Honda has two plants at Marysville and East Liberty, while Ford has a plant at Avon Lake.

While it would not name the other carmaker, a spokesperson for Dana did say that it was growth at both carmakers that had necessitated the expansion to the new facility.

In terms of supply of axles to the FCA facility in Toledo, as recently reported the carmaker is making changes to its production pattern in North America as part of efforts to focus its plants on larger, more profitable vehicles. This has repercussions for the supply chain, though the shifts in truck production between plants in the US, and to Mexico from the US, do not involve the Toledo plant at this stage.