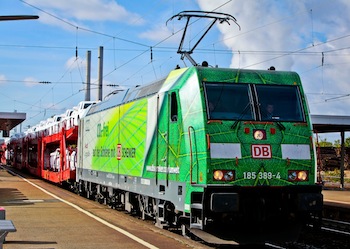 DB Schenker Rail has added a further route to its Eco Plus transport service for BMW in Germany. The service, which uses energy from renewable sources to drive traction, was first taken up by the carmaker last year for component shipments from Frankfurt to its plants in Regensburg and Landshut.

That service has now been extended north west to Wuppertal, near Düsseldorf. DB Schenker Rail said the service will achieve annual savings of almost 2,000 metric tons of CO2.

Users of the service receive an annual certificate confirming the CO2 emission savings. BMW received its first on February 13 this year for for the services from Frankfurt. Audi also uses the Eco Plus service for the movement of vehicles from its Ingolstadt plant in Germany to the port of Emden on the north coast of the country. German companies Mondelez International, Lanxess and Vinnolit also use the service, which has been available since 2010.

“On introducing Eco Plus, DB Schenker Rail successfully launched a pioneering product onto the market. We believe it is important to make an active contribution to environmental protection, and this innovative product does so without the need for projects to offset CO2 quantities that have already been emitted,” said Axel Marschall management board member for sales at DB Schenker Rail.

For BMW the extension of the service to Wuppertal started this March and a 500-metre train runs five times a week between there and the assembly plants; Regensburg and Landshut are 650km from Wuppertal and lie within 40 minutes of each other by direct rail link.

DB Schenker Rail is reported to be planning international Eco Plus services over the coming years.

International developments
The news comes as DB Schenker expands services in Europe and beyond. Last month, it announced investments to improve North African branches in Tangier and Casablanca, through the national company Schenker Maroc.

Similarly, the start of 2014 saw the logistics provider’s railway arm announcing new freight services with high speed railway routes across Europe. The services now carry automotive components from Spain to east London, via the Channel Tunnel. The contract between the two is expected to last initially for six months.

“The new contract demonstrates the value of the high speed network in the UK," said a spokesperson for HS1. "Due to size dimensions of the freight, it is something that can only be carried in the UK on the high speed network, offering the shipper a seamless European rail service. We enjoy a good relationship with DB Schenker Rail UK and have always maintained that a partnership approach is crucial to the long term success of the HS1.”