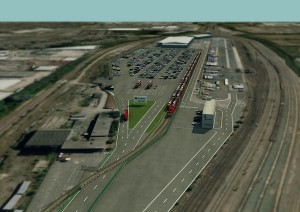 The UK division of DB Schenker Rail has announced the development of a multimodal European hub for the import and export of finished vehicles, which will be the only rail linked facility of its type in the country. It hub, which will initially have the capacity to handle 150,000 vehicles per year, is sited in Barking, east of London, and will be connected to the HS1 high-speed rail route that connects the capital with the Channel Tunnel and wider Europe. It is expected to open in March next year.

The company did not disclose how much in was investing in the site other than that it was a multi-million pound figure.

DB Schenker Rail has taken a 20-year lease from property developer Axa on the 14-hectare site to build the facility, which will provide for the unloading, storage, preparation and distribution of imported and exported finished vehicles.

The company said it would provide a pivotal link between the UK and Europe, while also having good access to the UK motorway infrastructure. The facility will be able to handle intermodal traffic both internationally and domestically, providing the opportunity for modal shift onto and off rail.

“It will provide simplified logistics supply chain solutions for customers, reducing transhipment and the associated risk of damage through handling,” said the company in a statement. “Furthermore, it will also allow for significantly shorter transit times and reduced CO2 emissions when compared to current typical international transit modes in the automotive sector.”

The new facility has the potential to create 21 local jobs over the coming years said the company.

DB Schenker's decision to invest in supporting finished vehicle traffic in and out of the UK is significant given the fact that UK exports are rising. The country exports 80% of the vehicles it makes while it imports around 85% of the cars that are sold.

"The growing UK export market has contributed to our decision to develop the Euro hub along with the global dynamics of our customers’ markets," a spokesperson told Automotive Logistics. "DB Schenker Rail is aiming to be the logistics supplier of choice, providing integrated, customised, innovative and sustainable logistics solutions throughout the supply chain."

DB Schenker Rail UK is the UK’s largest rail freight operator, operating over 5,000 trains each week and employing over 3,000 people in the UK.