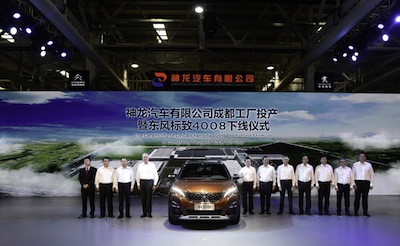 Dongfeng Peugeot Citroën Automobile (DPCA), PSA Group’s joint venture in China, has inaugurated a new plant in Chengdu dedicated to the assembly of SUVs. It has an annual capacity to build 300,000 vehicles for the Dongfeng Peugeot, Dongfeng Citroën and Dongfeng Fengshen brands using the PSA Group's EMP2 platform.

The plant, which took two years to build, is DPCA’s fourth in China, and its first outside of Wuhan, in central China; PSA has a fifth plant, in Shenzhen, together with Chinese OEM Changan, Changan Automotive PSA (CAPSA), which produces DS-brand vehicles.

Dongfeng owns a 14% stake in PSA Group; the two carmakers have set an objective of selling 1m vehicles in China and South-East Asia by 2021.

The company and joint venture have so far not confirmed details about the logistics setup for the plants. However, the plant in Chengdu, in Sichuan Province in south-west China, will expand DPCA and PSA Group’s supply chain across China, likely requiring new trucking and potential multimodal routes for more long-distance inbound and outbound logistics.

Neither PSA nor its largest logistics provider, Gefco, have yet to confirm if the provider will be involved in transport or in-plant logistics services. Currently, Dongfeng Gefco, a 51:49 joint venture between Dongfeng’s in-house provider, Hongtai, and Gefco, operates in-plant logistics at two DPCA plants in Wuhan, and complete knockdown kit packaging and shipping. The JV provider also runs a regional warehouse for DPCA in Beijing for northern China spare parts distribution.

Gefco has a second, 50:50 joint venture, Shenzhen Minsheng Gefco Logistics, that does in-plant logistics for CAPSA in Shenzhen.

Pushing growth through SUVsThe first model to be produced in Chengdu will be the Peugeot 4008, which is scheduled for market launch in China in November this year. According to PSA Group, the SUV market grew by 53% last year and expanded in the first half of 2016 by 44%. It currently accounts for almost 40% of the Chinese vehicle market.

PSA, whose current model line up in China is heavily weighted towards sedans, is struggling in China this year, with sales down close to 20% compared to 2015.

"This new plant will help us to expand our vehicle range in the fast-growing SUV segment and meet the needs of our Chinese customers,” said Carlos Tavares, chairman of the management board of PSA Group. “It represents an important step in implementing our Push to Pass plan and achieving our objective to launch 20 new models in China by 2021, and sell over 1m vehicles in the region by 2018."

Push to Pass is PSA Group’s turnaround plan to increase global profitability. DPCA in particular is aiming to generate revenue in excess of 100 billion yuan ($14.9 billion) by 2020.

DPCA is already a global centre for PSA production in China, including the Peugeot 408, knockdown kits of which are shipped abroad.

Last year the joint venture also took over the vehicle import business that was previously handled by the French carmaker’s office in Asia.