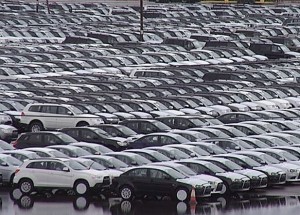 The current stagnation in the Russian car market and the consequent drop in rates has led to more finished vehicle transport companies going out of business than in 2009 when the global economic downturn hit. The result is a loss of capacity, an instability in lead times for the carmakers and a deterioration in quality levels because of an ageing standard of equipment.

Speaking at this week’s Automotive Logistics Russia conference in Moscow, Dmitriy Tikhomirov, managing partner at Inter Auto Group – Russia, said that the transport sector was deadlocked and that the slump in the Russian market, which has been dragging on for more than two years, has dried up financial resources for small and medium-sized providers, many of which have left the market without replacement. Other providers have withdrawn equipment because of the drop in rates and the rise in operating costs and are waiting for a recovery in the market before they reintroduce them according to Tikhomirov.

“When the market drop continued and rates were reduced there was a struggle amongst providers,” he said. “Rates dropped very low and some companies have withdrawn.” He added that the logistics providers left will now not be able to meet even slight growth in the market without investment in new equipment.

The impact on lead times for both road and rail transport has been registered by the carmakers. Alexey Kokotkin, manager of vehicle logistics at Toyota Motor, said that lead times at the end of last year and the beginning of 2014 were particularly bad, with delays reaching more than three days, a situation he described as “horrible and unacceptable”.

“Last year we took pride in the progress we made with our partners,” said Kokotkin. “This year we see a negative trend has been particularly dramatic.”

Toyota has responded by introducing a group scheme for faster delivery, which avoids loading delays and is based on earlier scheduling.

Renault-Nissan has also registered the impact of the market slump and its effect on the carrier sector.

“On a high market everyone is fighting for capacity, but now we have a weak market and it affects business planning,” said Sergey Levshin, outbound logistics manager for Nissan Manufacturing Russia. He went on to describe how the company was dealing with the challenges of managing fixed costs in the transport sector and the issues surrounding the use of subcontractors at peak times, including quality rates.

The problems for the industry are compounded by high inflation rates, which have increased by 15% in the last year, and by fuel prices that have risen by 12%.

Added to this is the fact that the vehicle transport sector was suffering from a lack of professional drivers.  Inter Auto has been forced to set up special courses for its drivers as there are not enough skilled operatives to go round according to Tikhomirov. He added that added that Inter Auto was also working on ways to improve quality and upgrade its fleet