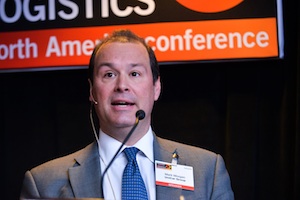 Outside of sudden weather events, such as hailstorms, less than 30% of damages that occur to finished vehicles between the factory and the dealer are traced back to the true culprit, especially when there is no comprehensive system in place to identify where and when that damage happened. So said Mark Morgan, director of business development (left) at UniCar – the vehicle inspection and claims management company – at this year’s Finished Vehicle Logistics North America conference in California last week. And according to Morgan the way to get a more accurate picture of where damage is happening is through inspections at every point of transfer in the supply chain from factory to dealer.

“Handover inspections are the only way to see if and when a vehicle gets damaged in the supply chain,” said Morgan. “This information is priceless as it can provide an insight into the quality of that supply chain.”

Damage control and quality maintenance throughout the supply chain was certainly something Toyota was interested in according to Brian Mason, national manager for strategic planning, logistics network optimisation and business controls at Toyota Logistics Services.

Mason highlighted the challenges in shipping vehicles literally to the other side of the world and problems that arise through the multiple hands the vehicle passes through in that process and the damage discovered on arrival.

“That is something that is very frustrating for us and to have quality control through that whole supply chain would be tremendous, especially on the export side, which is so sensitive to damage and quality,” he said.

Inspection not just a cost
While damage is already low when it comes to that which is incurred by the normal process of delivery, less than .25% and usually minor in scope compared to elemental causes such as hailstorms according to Scott Blind, president of paint repair specialist, KHS Global, the costs add up for the logistics provider. Morgan was sensitive to the idea that logistics providers would see additional inspection as simply another cost, alongside already rectifying the cost of damage that neither the customer nor the dealer would accept. Damage adds no value to the supply chain and typically ends up being billed to the LSP, according to Morgan, which eats away the profits that could be going into innovation and vital infrastructure investments. However, he stressed that seeing rigorous inspection as only a cost could open those providers up to a huge amount of liability and an increase in future costs.

Damage management is potentially a nexus of conflicting objectives between players involved in getting the car from the factory to customer. While in essence each party is trying to do exactly the same thing, namely get the right vehicle to the right place at the right time undamaged, in reality it is far more complex than that.

“Each has their own priorities and these priorities are rarely in the same order of importance for the parties,” noted Morgan. “Therefore, is it any wonder that the finished vehicle supply chain has become so unnecessarily complex and difficult,” he asked. But he went on to ask whether complexity had made the industry too busy to appreciate how simple the task really was.

With proactive planning and better data management providing increased visibility, along with a shared understanding of quality standards the path toward the ideal of zero damage was not insurmountable said Morgan.

Morgan also referred to the operations quality manual established by the European Vehicle Logistics Group (ECG) with participation and support of a wide cross-section of the finished vehicle logistics industry. The ECG is now working with the Automotive Industry Action Group in North America to introduce a similar manual there.

Damage from above
However, when it came to environmental based damage, the blame game went heavenward and the cost of repair was inevitable, including on techniques such as paintless dent repair (PDR), which has been used to fix hail damage since 1993 (though the technique has been around since the late 1980s). And while getting to the point of zero damage in the delivery process may be an ideal worth striving for, perfect repairs were already achievable according to Blind, something that was also down to thorough inspection.

“When I say perfect, I mean perfect,” he affirmed. “When we repair a car for the OEMs or the insurance companies the expectation when it arrives, wherever it is going, is a perfect repair. Certainly if there is anything but a perfect repair everyone will know that, particularly when it comes to new cars.”

This includes for parts, such as rear view mirrors and head and rear lights, for which KHS Global also provides repair services.

What you also needed, according to Blind, was accurate information sharing.

Depending on the amount of damage sustained a new car can go in different directions. It can go on to the dealer or become a used car, or even become scrap depending on where company thresholds on quality lie. But it is important to know early on how severe the damage is, said Blind.

“You need to know how much it is going to cost to repair and this should be done on the day of the hailstorm, said Blind. “It could be a thousand cars affected.” In fact Blind referred to one incident last year where KHS had to source 5,000 parts following one incident.

“They could all be going on to the dealers where you find out suddenly that the price has grown on you and you have disclosure issues and things like that,” he added.

The point was brought into focus by the fact that while delegates were discussing the topic of hail repair in California, where temperatures reached more than 100 degrees Fahrenheit, in the Midwest snow and ice storms, were bringing transport to a standstill and destroying buildings and vehicles alike, including in Illinois, Indiana and Iowa.