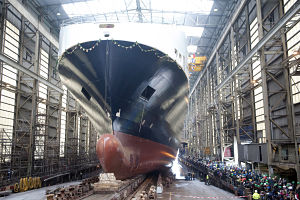 The new ship (pictured) was officially named Gardenia Seaways in a ceremony on February 17th. The second will be handed over in Flensburg, Germany in September.

Each is 210m long and has capacity for 262 trailers with a load space of 4,076 metres. They are set to enter service on DFDS lines in the North Sea.

Of its overall fleet of 50 passenger and freight vessels, DFDS currently has six vessels in use that have been built by Flensburger, which were delivered between 2004 and 2007.

“The volume on all routes within the DFDS network has grown noticeably, we are already using almost all the capacity available in our existing fleet,” said Peder Gellert, executive vice-president of the company’s shipping division.

He added: “The design of the ship, developed in Flensburg, meets current environmental requirements, reducing fuel consumption and providing much better handling when loading and unloading in port.”

The new ships are set to enter service in the North Sea and increase capacity by 20% compared with the tonnage to be replaced.

Another two vessels, the largest yet, are being built at China’s Jinling Shipyard for delivery at the beginning of 2019.

Gellert said: “DFDS is also considering the future construction of new combined freight and passenger ships, and the replacement of passenger ships.”