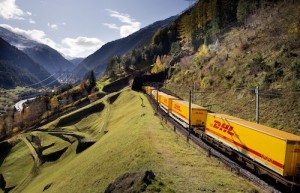 DHL Global Forwarding has begun a twice-weekly rail service between Zhengzhou in central-eastern China and Hamburg in Germany. The 17-day service, which will pass through Russia and Poland, will offer customers the option of DHL Railconnect, the less-than-container load (LCL) service, as well as a full-container option.

The latest service brings the number of multimodal rail services DHL offers between China and Europe to three: these run from Chengdu, Suzhou and now Zhengzhou. As announced in 2013 the first is a weekly scheduled block train service along the trans-Kazakh West Corridor from Chengdu through the Polish border at Malaszewicze to Lodz. The second service, which is also weekly, runs via the trans-Siberian North Corridor serving the manufacturing and commercial centres of Shanghai, Suzhou and surrounding areas and runs from Suzhou to Warsaw, Poland, also through the border at Malaszewicze.

In addition to the westbound Zhengzhou-Hamburg service, DHL said the eastbound Hamburg-Zhengzhou service will also be available to customers moving cargo from Europe to Asia.

"Zhengzhou, Suzhou and Chengdu are key economic centres of trade and development in China,” said Steve Huang, CEO, DHL Global Forwarding China. “Their strategic locations with close proximity to main Chinese cities of economic importance such as Shanghai, Nanjing, Dalian and Shenzhen are integral to a successful multimodal network spanning China to Europe. Offering multiple loading points across China has created business opportunities for customers in many industries and we are investing to expand our network to further increase these opportunities."

According to a statement by the company, the provincial GDP of the three cities together made up 20% of China's GDP last year.

DHL said its multimodal services offered to reduce delivery times by between 10 and 21 days, depending on origin and destination, compared to sea freight routes.

In 2014 DHL launched an ocean connection linking Japan into its Asian network which provides more customers in North Asia with an additional alternative to sea and airfreight, and access to benefits such as reduced transit times, costs and CO2 emissions.