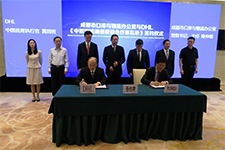 DHL Global Forwarding, the freight services division of Deutsche Post, has signed a memorandum of understanding (MOU) with Chengdu Gateway Logistics Office, to build a logistics corridor between China and Europe. Chengdu Gateway Logistics Office is the Chinese government agency responsible for developing Chengdu, the capital of the south-western Sichuan province, into a major trade hub under the country’s ‘One Belt, One Road’ initiative.

DHL Global Forwarding said it will now collaborate with Chengdu’s administration to improve the security, customs efficiency and freight capacity of the city’s logistics infrastructure.

The company said that certain high-growth sectors, including automotive, are expected to see production grow by more than 50% within the next ten years, and that its specialist services in electronics and automotive logistics were expected to receive particular focus from Chengdu’s industrial clusters. DHL cited Dongfeng Peugeot Citroën Automobile’s (DPCA) plant in Chengdu as one source of activity; trial production began at the plant this month.

Asia's largest rail container transport hub, located in Chengdu, and the city’s freight connections to Europe have undergone rapid renewal ahead of the One Belt, One Road initiative, as was discussed at the Automotive Logistics China Conference in Chengdu in April this year.

Chengdu now produces more than 1m vehicles a year at factories that include FAW Volkswagen, FAW Toyota, Volvo Cars and Geely. Most of these plants, together with suppliers, high-tech warehouses and logistics centres, are based in the Chengdu Technology and Development Zone in the Longquan District.

The Chinese government has developed high-speed rail links like the Chengdu-Europe Express Rail between the city and Lodz, Poland in 2013; and the Chengdu-Central Asia Express Rail in 2014, to support the development.

“As one of the best-performing cities in China when it comes to economic growth, industrial strength, and overseas investment, Chengdu has immense potential to add value to the former south Silk Road’s revival,” said Steve Huang, CEO, DHL Global Forwarding China. “In the next few months, we will also be working on bringing rail service from Chengdu to Turkey, furthering our rail development in the city since we first opened our West Corridor rail solution from Chengdu to Lodz three years ago. We look forward to making the most of the opportunities for growth and development in Chengdu.”

Last year, DHL expanded the multimodal network to Taiwan, linking Taichung to the Trans-Siberian North Corridor from Suzhou to Warsaw, and added the westbound and eastbound services from Zhengzhou to Hamburg – in addition to the Trans-Kazakh West Corridor rail service that connects Chengdu to Lodz.