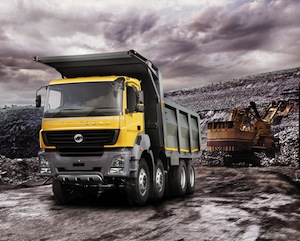 Full year figures for 2015 from Daimler India Commercial Vehicles (DICV) reveal that the subsidiary passed the 4m mark for truck parts exported around the world. The company, which began production in 2012 at its Oragadam factory near Chennai, also increased domestic sales by 37% to 14,000 units and has introduced 20 products to India.

According to the company, demand for BharatBenz vehicles rose notably in the heavy-duty segment in 2015, including for new products in the mining and construction segments such as the BharatBenz 3143 CM.

“With important new BharatBenz product generations hitting the market in 2016, we are committed to sustainably grow our business as part of Daimler Trucks Asia,” said Erich Nesselhauf, managing director and CEO. “Both in the medium and heavy-duty segment we will once more raise standards and customer value. At the same time, Indian-made Fuso trucks will play a key role in opening up important growth markets in Asia, Africa, and Latin America.”

Fuso trucks make up the majority of DICV exports from India to markets in Africa and Asia.

Regional centres in AfricaIn other news, Daimler Trucks Asia (DTA), the Daimler Trucks division that jointly operates Mitsubishi Fuso Truck and Bus Corporation (MFTBC) and DICV, is opening two regional centres in Africa – one in Nairobi, Kenya and one in Pretoria, South Africa. According to the company, the centres will be responsible for sales and service of all Daimler brands in 41 markets in East, Central and West Africa, and will cover nine markets in southern Africa.

“With the opening of these two new regional centres, we will get closer to our Fuso customers in Africa, being able to sell and service them better,” said Marc Llistosella, president and CEO of MFTBC and head of Daimler Trucks Asia. “We believe that Africa has a big growth potential for robust and efficient trucks and intend to increase our sales and market share with this step.”

DTA has exported the new Fuso range from the Chennai plant to Kenya, Tanzania, Uganda, Nigeria and South Africa since 2013. More markets are now planned.

Later in 2016 DTA will start selling its new high-powered heavy-duty truck under the Fuso brand in Kenya and Tanzania in response to demand for increasing infrastructure projects.