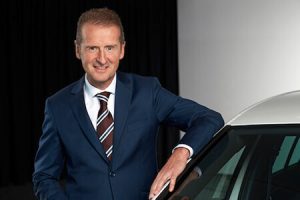 As part of an extensive revision of VW Group’s management structure, Herbert Diess (pictured) is taking over from Matthias Müller as chairman of the board. Diess will also be responsible for VW Group development and research, as well as Vehicle IT.

Hans Dieter Pötsch, chairman of the supervisory board, said Diess was the right manager to ensure VW Group secured its position as an international vehicle-maker, as well as being instrumental in shaping the future of personal mobility.

“In realigning the Volkswagen brand, he has demonstrated to impressive effect the speed and rigour with which he can implement radical transformation processes,” said Pötsch.“This makes him predestined to fully implement our Strategy 2025 in the decisive years that are now to follow.”

That strategy to transform business operations and realign VW was first introduced in 2016. By 2020, VW wants to reorganise its core business and by 2025 it wants to become the global market leader in e-mobility.

Meanwhile, Porsche CEO Oliver Blume has moved to the group board of management in charge of group production.

Blume started his career with Audi back in 1994 and went on to take roles in body construction, planning and logistics. He was made head of production planning at the Volkswagen brand in 2009 and became the member of the executive board for production and logistics at Porsche in 2013. Blume will retain his role as CEO of Porsche.

In another move to realign its organisation VW has chosen to combine its Procurement and Components divisions into one unit. Garcia Sanz, who was head of procurement, has left the company and Ralf Brandstätter, board of management member responsible for procurement for the VW brand, will take on this additional role provisionally. However, the company intends to find a manager for the combined unit in due course and told Automotive Logistics it would be fleshing out the details of the new structure in the weeks and months ahead.

Among the other changes at the company, Frank Witter will lead company IT and Rupert Stadler will lead group sales.