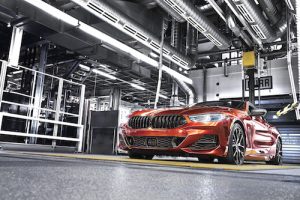 This week BMW began producing the luxury 8 Series coupé at its Dingolfing plant in Germany and the digitalisation of production and lineside logistics is playing a central role in the manufacturing of the new model, according to the carmaker. That includes in the delivery of parts to the factory floor.

Parts required in door assembly are delivered to the pre-assembly zone from the neighbouring logistics hall by two autonomous tugger trains.

Though BMW has used driverless tugger trains on long routes between warehouses since 2016, a newly developed automation kit enables manual tugger trains to be upgraded with their own intelligence, a company spokesman told Automotive Logistics.

Parts can be supplied directly in the indoor assembly hall where more than 20,000 components are handled.

“This means that autonomous driving in the production logistics of the BMW Group is reaching the next level of development,” he said.

The driverless tugger trains’ capabilities include dynamic route guidance based on delivery priority, while bypassing obstacles is made possible through laser scanning of the hall several times per second.

“The tugger train can navigate through the halls with a positioning accuracy of give or take 10mm. No infrastructure adjustments are necessary in the assembly halls and logistics areas,” the spokesman added.

In addition, a smartwatch supports logistics staff during the container change process and announces approaching tugger trains via a vibration alarm. The employee can read which containers should be unloaded and send the tugger train to its next destination.

Jürgen Maidl, BMW’s head of production network and logistics, said that only a few months passed from the first concept of autonomous tugger train to the successful pilot operation in a vehicle plant.

The group’s strategy is to launch innovative technologies in a structured roll-out. Other plants plan to test the use of autonomous tugger trains in their operations.

Assembly line workers, meanwhile, are also making increasing use of wearable mobile computer technology. In addition to a smart glove scanner, which allows process steps to be documented, the workers have a so-called ‘exotics alarm’, which uses the vibrating alarm of a smartwatch to alert the worker to when a car with non-standard equipment options is coming up on the line and require the selection of different parts.

In the preparation for production, BMW used virtual reality glasses for the first time to train assembly staff who viewed videoed assembly processes through them. “This enabled [staff] to familiarise themselves with the new model and the correct fitment process before production ramped up,” the company said.

The new 8 Series coupé will roll off the assembly line alongside 5 Series and 7 Series models at Dingolfing, and relies on tried and tested manufacturing processes, the company said.

Away from logistics and the nuts and bolts of assembly, the luxury sportscar is made from a mix of steel, plastic, aluminium carbon fibre and other materials, according to BMW.

Features include the option of a carbon-fibre reinforced plastic roof for the first time in a series-production BMW.