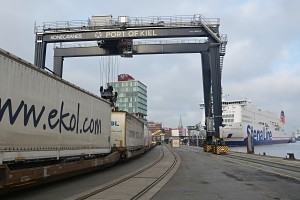 A direct train connection has been established between the port of Kiel, in Germany, and the port of Trieste, in Italy, creating a link for rapid freight transport between the Baltic and Eastern Mediterranean Sea.

In addition to the new block train service, a 234 nautical mile sea connection between Kiel and Gothenburg, in Sweden, is being offered by shipping company Stena Line.

After an initial trial phase, the train will become a regular service in mid-April. It will be the first train service from Trieste on the Baltic-Adriatic corridor, according to Ekol.

Dirk Claus, managing director at the port of Kiel, said: “This is a milestone for Kiel as a logistics hub. The train is an ideal link for rapid freight transport between the Baltic and the Eastern Mediterranean seas.”

Alaa Jennane, director of engineering business development at Ekol, said: “In the continuity of Ekol’s strategy of expansion, we are very glad to offer a new intermodal bridge linking Scandinavia, North Germany, Russia and the Baltic sea with South Europe and the Middle East, for example Turkey or Iran.

Outside of the Gothenburg connection, shipments can also be forwarded from Kiel to Northern Germany and Denmark by road, Ekol’s project development manager, Wilfried Klein, said. The company was also planning to add a second service to the route “really soon”, he said.