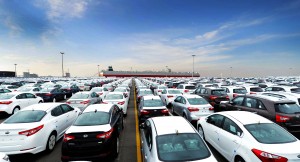 Norwegian investment bank, DNB Markets, has reported a brighter outlook for the maritime car carrier sector as a result of slower fleet growth and rising demand, factors it said that have led to better vessel utilisation.

In a report seen by analyst firm IHS Maritime, DNB stated that the market for automotive, and high and heavy equipment, remained competitive. IHS quoted DNB shipping analysts, Nicolay Dyvik, Oyvind Berle and Petter Haugen: “The second quarter was characterised by a seasonal increase in ocean transportation volumes and improved underlying contribution from the logistics segment.”

DNB said the global trade in cars increased by 5% last year, after two consecutive years of decline, which translated into a 2% increase in the demand for transport services. Based on industry data for global vehicle production, the company estimated a 3% growth in annual tonne-mile growth for the car segment between 2015-2017.

Referring to figures from LMC Automotive, which provides intelligence on automotive production, sales and powertrain forecasts, the analysts forecast a 12% increase in car production to 10.5m units from 2014 to 2017, with two-thirds of the figures coming from increased production in China (53% of total growth) and India (13%).

The analysts forecast fleet growth in the pure car and truck carrier (PCTC) segment to grow 4% this year and 3% in 2017.

"Historically, there is a multiplier effect ranging from 1.2 to 1.6 from production growth to demand growth for seaborne transportation, but as we assume that most of the production increases from China and India is destined for the domestic markets, we choose to assume a one-to-one relationship between production growth and trade growth in our forecast horizon for 2015-2017," the analysts said.

The DNB report stated over that period it expected steady tonne-mile demand from Korea but a decrease from Japan by 9%. German car carrier tonne-mile demand growth is expected to be 2%, largely to do with the growing importance of the Chinese market. It backed this up with figures that showed that German exports rose by 5% in 2014 and that China was responsible for a quarter of that growth.

This is backed up by recent figures for US vehicle handling ports. As reported in Automotive Logistics most recent annual survey of North American ports, those on the west coast, including Portland, Oregon and Grays Harbor, have seen import weaknesses offset by export growth to Asia, especially China.  Charleston in South Carolina is now one of the country’s leading vehicle export ports, thanks to BMW’s plant in Spartanburg. Overall last year, export outperformed imports in the survey – albeit from a much lower base – growing by 6.8% from 2013, while imports nudged up 0.4%.

Import and export ro-ro trends in North America will be under discussion at this week’s Import Export North American conference in Baltimore. Learn more here.