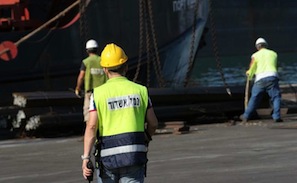 Volume deliveries of vehicles through the Israeli port of Ashdod have been disrupted by labour action taken by dockworkers in the Ashdod Seaport Workers’ Union. The situation is causing problems for ocean forwarders, including Grimaldi, which have been forced to look for room at adjacent ports.

According to Israel’s Haaretz news source, last week union boss Alon Hassan ordered union workers not to unload automobiles from vessels that were in port. The action follows a decision taken by Israel’s government to issue tenders for two privately-run seaports alongside state-owned terminals at ports including Ashdod and Haifa. Europe’s largest private port operator, Eurogate, has already submitted its bid to run the ports.

Confirming that it was unable to unload vehicles at Ashdod because of the strike, Grimaldi’s logistics and commercial director, Costantino Baldissara, said that to avoid incurring delays in its vessel schedules the company was working with receivers to unload cars at the next closest ports.

“In these circumstances we cannot do anything else than check the situation day by day and decide on the basis of the last update,” said Baldissara.

“K” Line, which had also delivered car volumes to the port of Ashdod, ceased services in January last year and no longer makes direct calls to Israel. A spokesperson said this was because of a “rationalization” of its service.