The first thing that needs to be done to improve the road haulage business in India is to tackle the lamentable working conditions of truck drivers. On a whole, they are treated as little more than social outcasts, according to Selvan Desaraj, founder of Transport Mitra, a truck driver advocacy group operating in the country. 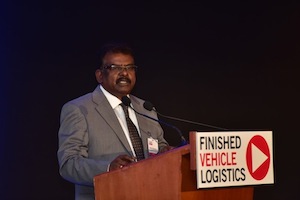 Speaking at this year’s Automotive Logistics India conference in Delhi, Desaraj had some stark facts on the situation for truck drivers, including those responsible for the transport of finished vehicles across India.

India has the second largest road network in the world, at 3.83m km. That network carries 65% of the freight moved in the country, and 85% of passengers. The trucking industry has around 5.6m vehicles on the roads. However, according to figures presented by Desaraj, 26% of trucks are parked without drivers and the sector risks facing a 60% shortage by 2022. The sector needs to recruit 750,000 drivers a year, but it is not difficult to see why this is a challenge.

There is a critical lack of highway rest stop amenities and overnight parking bays for long haul drivers travelling huge distances – often upwards of 1,000km. Secure parking areas are rare and many sleep on the side of the road in their vehicles. Also, many choose to drive between 12am and 5am to avoid police and tax officials. There is also a dearth of repair stops on highways. Taken together, this has helped push India’s fatal accident rate on its national highways to 32.6%, with most accidents occurring between 12am-5am. According to the National Crime Records Bureau, almost 4,000 accidents took place across the nation due to vehicles parked at the roadside shoulders. Around 4,510 people were injured, and there were 1,325 deaths recorded in 2014.

The sector is also plagued by low literacy levels and there is a lack of training. Added to this, 38% of drivers remain unmarried because of the social stigma attached to the job. More dramatically, Deseraj said that 50% of the AIDS and HIV in the country is contributed by those in the truck driving sector.

A truck driver’s job is not well paid either. Desearaj pointed out that while transport cost in India was the cheapest in the world – 35% of the overall logistics cost compared to 50% in the US – OEMs continue to ask for transport operators to cut their price. The upshot is that the operators pay the drivers less.

Dhaba programme
Transport Mitra is tackling these problems head on with a programme designed to promote health and economic advancement, as well as raise social awareness.

The Golden Quadrilateral Dhaba Adoption Program aims to establish 100 dhabas – the roadside rest stops in India – that will act as a base for various socially responsible support services.

As part of that support, the dhabas will provide health care services based on a three-tier, health risk assessment for the drivers, and a progressive training programme. “They will heighten awareness of road safety, reinforce self-esteem and promote self-efficacy,” said Deseraj. “Our solution is to stratify drivers and grade them by experience and skill to improve social awareness.”

Transport Mitra has already started a training programme at the dhaba at Sonipat in Haryana, and there is a Driver Empowerment Centre at Bengaluru.

However, the responsibility for the well being of India’s drivers is more widespread, Desaraj said.“Who is responsible for lifting up the driver? We all are,” he said. “It is important for each one of us. We need to take a step forward. They are a backbone of the industry in India.”

Learn more about what Transport Mitra is doing