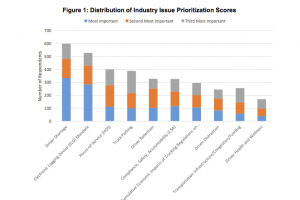 The shortage of truck drivers in North America has climbed six places to come top of the list of concerns in a survey into critical issues facing the sector, conducted by the American Transportation Research Institute (ATRI). The results were released at this week’s 2017 American Trucking Association (ATA) Management Conference and Exhibition in Orlando, Florida.

It is the first time since 2006 that the driver shortage has topped the annual ATRI Top Industry Issues report, which this year generated more than 1,500 responses from motor carriers and commercial drivers.

The report also included “prioritised strategies” for addressing each issue and, in response to the driver shortage, industry stakeholders recommended working with state and federal authorities to develop a commercial driver's licence programme to attract safe, younger drivers to the industry. Stakeholders also pointed to partnering with the US Department of Labor to formalise a national driver recruitment programme.

"Identifying the right mix of partners and strategies to effectively address the driver shortage is one of our top goals for the industry," said the ATA’s president and CEO Chris Spear. “ATA and its federation partners rely on ATRI's annual analysis to ensure we successfully navigate the important issues now and into the future."

In the ATRI survey, the driver issue ousted the Electronic Logging Device (ELD) rule, or eLog, as the number one concern on the overall list, though eLog legislation remained number one for commercial driver respondents.

It is intended to help create “a safer work environment for drivers, and make it easier and faster to accurately track, manage, and share records of duty status (RODS) data”, according to FMCSA. However, there has been some resistance by driver unions to ELD and electronic HoS compliance, and some US carriers are conscious that they could lose drivers as a consequence of the ruling.

The HoS rules remained a top concern in the number three spot on the ATRI list as motor carriers and drivers look for increased flexibility in the rules.

The FMCSA has established a deadline for eliminating paper logs in December this year but there has been some resistance by driver unions to ELD and electronic hours of service compliance, and some US carriers are conscious that they could lose drivers as a consequence of the ruling.

The driver shortage and HoS rules are two main concerns for the finished vehicle sector in North America. In a separate survey conducted by Finished Vehicle Logistics magazine and the Auto Haulers Association of America (AHAA), better pay and more home time were seen as the best two ways of attracting and retaining them, though the issue is more complex and will need investment according to the responses to that survey.