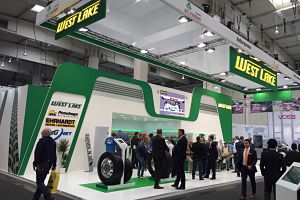 DSV has been using the tyre brand on its own fleet since 2012 and will now offer the truck and trailer tyres to all subcontracted hauliers and to the commercial vehicle market more generally.

The countries included in the deal are Denmark, Norway, Sweden and Finland.

ZC Rubber is China’s biggest manufacturer and one of the 10 largest producers in the world. It was founded in 1958.

The company displayed the latest Westlake range of tyres at the IAA Commercial Vehicles show in Hanover in September (pictured). The tyres shown there were designed specifically for the European market.

DSV’s deputy equipment manager, Flemming Steiness, said: “This is a great achievement in further commercialising the relationship between DSV and ZC Rubber.”